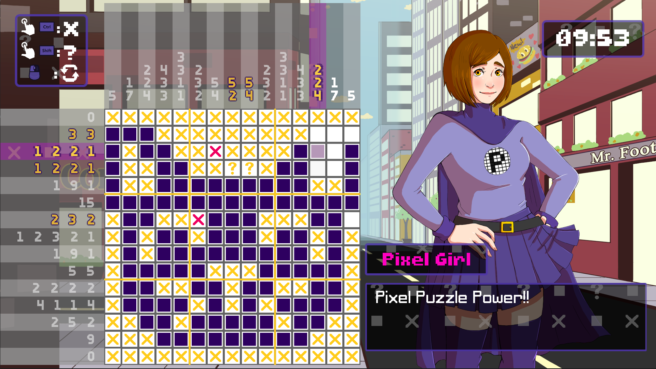 You are Pixel Girl, a superhero with the power of “pixel puzzle-solving.” Turn your problems into picross, then solve ’em to save the day!

Join the Puzzle League and date up to four of your fellow puzzle-themed superheroes, before the Villain third-wheels you with his doomsday plot!

Dating sim meets puzzle game in this comedy/romance superhero adventure
Join and date the Puzzle League: a group of 4 superheroes based on crossword, sudoku, chess and jigsaw puzzles
Over 100 pixel puzzles to solve: your superpower makes puzzles a part of the narrative
An overarching supernatural plot weaving in multiple dates with each character
Exotic date locations: a café, the library, mountain climbing and the center of the earth?!
Twists, turns, thrills, chills, puzzle fun, and puzzle puns! It’s not over until the ending!

Sudoku: the most logical of the group, magical girl outfit was made by a friend
Chess: careful planner, but tends to think in black-and-white
Pixel Girl (that’s you!): surrounded by cuties and blessed with the power of attraction
Crossword: rarely gets cross, always has a way with words
Piecea: an alien from the Puzzle Planet who wants to get handsy with you… wait…