Demons Ate My Neighbors! Twin-stick shooter coming to Switch in 2021 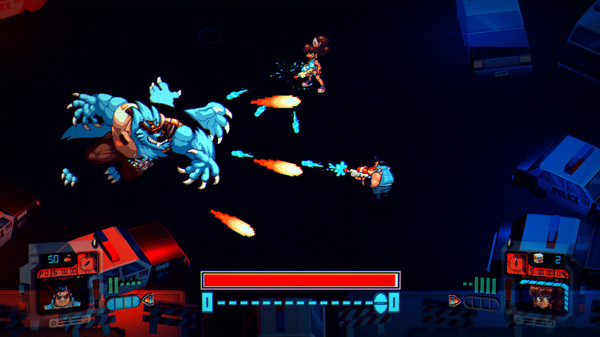 Demons Ate My Neighbors! will be arriving on Switch and PC via Steam in 2021. Developer Tuned-Out Games is working on the colorful project, which is planned to have co-op play as well as secondary weapons and stackable upgrades. You can take a look at more of the info from their Steam page about the game after the break:

Demons Ate My Neighbors! is all about the feeling of hanging with your friends as a teenager, exploring your town, and getting thrown into a mess of trouble.

Demons Ate My Neighbors! is fantastical, flashy, and thrilling, and focuses on the goofier, campier side of horror.

Demons Ate My Neighbors! combines the anticipation of discovering what power-ups do and the satisfaction of building up your character into a game-breaking apocalypse machine, like in Binding of Isaac, with the rollercoaster-ride elements of Zombies Ate My Neighbors.

Demons Ate My Neighbors! gameplay is fun, memorable, and easy to pick up. Gameplay sessions are 10 to 45 minutes, and procedurally generated Stages allow a unique experience every bootup.

Demons Ate My Neighbors!, the retro-inspired twin-stick roguelite shooter developed by Tuned-Out Games and incubated at HumaNature Studios by Greg Johnson and the team behind ToeJam & Earl: Back in the Groove!, brings nostalgic cult arcade horror to PC and Nintendo Switch in Q3 2021.

1991—it seems like any other sweltering July in the sleepy suburbs of Fairweather Valley… until a cursed VHS unleashes untold horrors upon the neighborhood, turns the residents evil, and generally makes April and Joey’s summer a total bummer. Our heroes must exorcise their neighbors from hell, fight their way back to the haunted High School and rewind their summer to save the world!

Two heads are better than dead. Team up in local co-op, then pump, refill, and spill ’em all with Splasha squirt guns, loaded with an infinite supply of holy water. Pump past the limit with Overpump and unleash holy hydro hell. Swap and pop Nozzles to drench demons with different shots, effects, and Overblasts—then upgrade the Splasha’s stats with Nitro Splashtanks found throughout the ‘burbs of Fairweather.

Getting lost finding possessed citizens in procedurally-generated levels? Not with the radical Radar Radio called the RadWatch. Level it up by slaying monsters to boost its range and ability to find survivors. Depending on your choices, some citizens will Tune-Out!—and transform to climactic combat challenges where one of three choices must be made: DAMN, DELIVER, or DIE. Be kind and rewind by draining their recharging stamina with a Holy Hi-Fi arsenal to DELIVER them from evil, or blast through with Lethal Lo-Fi weaponry to let them stay DAMNED.

Don’t worry about death—with infinite timelines, another April and Joey are ready to DAMN! or DELIVER all over again. This time, smash through and loot the ‘hood. Knock over mailboxes, trashcans, and more to find household weapons that exploit monster weaknesses. Freeze Zombos, zap Zaplings, and vaporize Vampunks with Garlic Pizza. Collect VHS tokens from Boss Demons to unlock new permanent meta upgrades in the hideout.