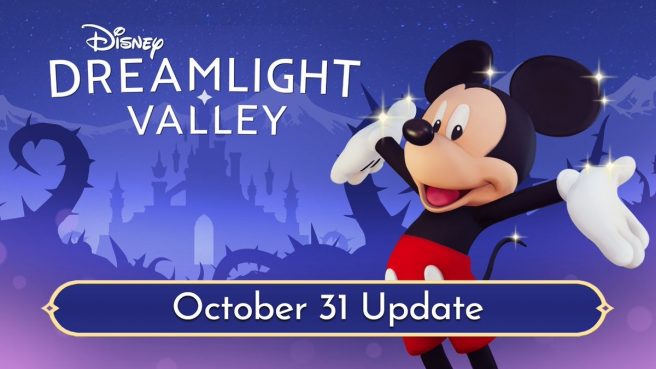 A new Disney Dreamlight Valley update has been released for October 31, 2022.

Improvements and optimization here are included as well as bug fixes. Everything is based on feedback received along the recent Scar content drop.

Below are the full patch notes for the Disney Dreamlight Valley October 31 update:

– Added toggle in Settings menu to remove in-game flash effects. This will impact:

— Screen wobble while waiting during the fishing action

Please note, we will continue to closely monitor community discussion to identify whether additional effects or instances should be added to these toggles.

– Fixed quest blocker for Mother Gothel’s “Restoring The Sunstone” quest. We acknowledge that the previous fix did not resolve the issue for all players, so we are continuing to closely monitor this fix to see its impact on the community.

– Fixed the castle motif on the Disney Castle t-shirt.

– Fixed an issue that prevented players from picking up some items at the base of palm trees on Dazzle Beach.

– Fixed the Toy Story-themed Fancy Table to allow objects placed on it to be picked up.

– Moved a lamp in Mickey’s house to prevent objects from getting stuck behind it.

– The Webbed Tree in the Villains Star Path can now be found under the Foliage category in the Wardrobe menu.

– Scar’s Volcano Stove can now be selected after being placed in the world.

– The Collection menu will now update itself properly after collecting items.

All players on Switch can download the Disney Dreamlight Valley October 31 update now.