Dogworld getting a physical release on Switch 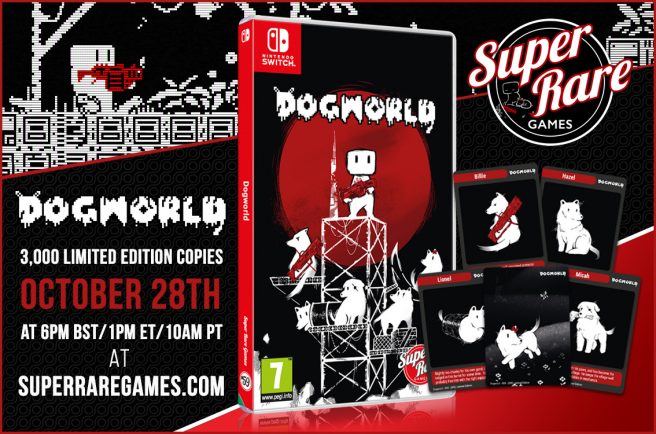 Super Rare Games, in partnership with Lateralis, has announced a physical version of the 1-bit action platformer Dogworld.

The company will produce 3,000 copies in total. Each unit includes all the current content on its cart, a full-color manual, interior artwork, an exclusive sticker, and trading cards.

Here’s some additional information about Dogworld:

Shoot, jump, and slide your way through a ruined, mysterious, dog-filled world as you fight to save humanity from the clutches of a rogue AI named Daddy. Acquire new weapons, upgrade them to be more powerful, collect secrets, meet bizarre characters, and explore the ruins of a destroyed world.

After a catastrophic event on Earth, humanity is directed underground and into pods for their safety. You are told that the surface world is dangerous and uninhabitable, and inside the pods is the only safe place to be. But when you are launched from the underground in a freak accident, you realize that the surface is just fine and there’s more to this world than you thought. The surface is teeming with life, except… they all seem to be dogs. And some of them talk.

Slide to dodge through enemies and projectiles

Uncover secrets and abilities to help you on your journey

Take on a multitude of powerful bosses

Pre-orders for the physical version of Dogworld go up on October 28 at 10 AM PT / 1 PM ET / 6 PM in the UK / 7 PM in Europe. Super Rare Games will have reservations here. Keep in mind that Super Rare Games titles ship soon after going on sale.