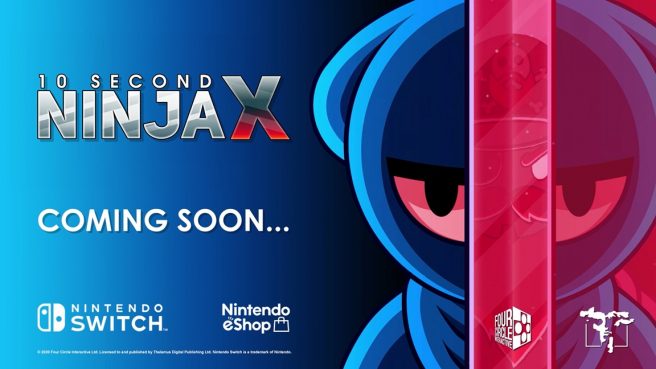 Thalamus Digital has announced that it has teamed up with Four Circle Interactive to bring the fast-paced platformer 10 Second Ninja X to Switch. A release date hasn’t been announced, but the game has been said to be “coming soon”.

Here’s an overview of 10 Second Ninja X, along with a trailer:

10 Second Ninja X is a shockingly fast, overwhelmingly intense action/puzzle game. In this thumb blistering sequel, the nefarious Captain Greatbeard has kidnapped you and trapped your forest friends inside of his army of robots like some kind of psychopath. Greatbeard doesn’t think you’re the fastest ninja who ever lived – he is WRONG. Destroy all of Greatbeard’s robots in each level in ten seconds or less. Be fast enough to get the coveted three star rating in each. Fight through 100 levels, explore Greatbeard’s airship, discover secrets, climb the leaderboards and show everyone what it means to be THE FASTEST, COOLEST HERO EVER.

10 Second Ninja X is expected to be sold digitally for Switch via the eShop.