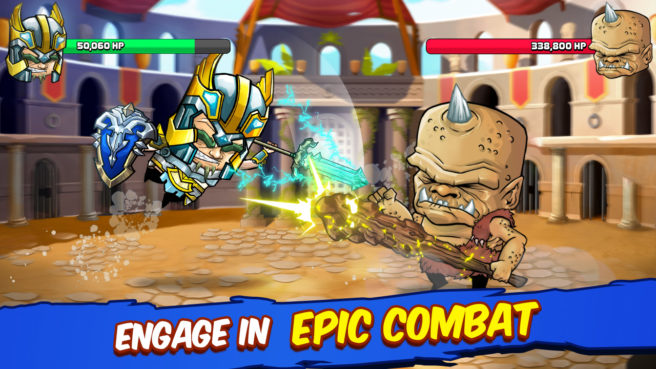 Tiny Gladiators, a fighting and RPG game that has seen a significant amount of downloads on mobile, is now making its way to Switch. An eShop listing shows that a release is planned for November 22.

Here’s an overview of Tiny Gladiators, along with a trailer:

Tiny Gladiators swings you back and forth like a battleaxe: crush your rivals in 1-on-1 combat, then set out on your road to revenge, building up your magical arsenal as you seek your father’s killer. Now charge back into the fighting arena, armed with fearsome powers, to strike your rivals down!

The more fights you win, the more weapons you can afford, and the further you can venture into the fantastic world of Tiny Gladiators. Grow your powers and skills, and watch your Tiny Gladiators rise into legends!

-Lightning-fast fighting game with an RPG twist
Truly original gameplay, where supernatural powers are earned and nothing is taken for granted. Well-paced gameplay varies between RPG quests and all-out white-knuckle duels.

Take on your friends (and enemies!) in fighting mode

Team up with a friend and take on the world together! The more fights you win, the more weapons the two of you can afford. You’ll need all the help you can get in the later levels…

Eventually your strength is going to give out, but you can take a whole lot of enemies with you first! (Their souls belong to you now…)

And all of them different. As the warriors you fight grow increasingly fierce, you’ll need all the powers you can get!

You say it’s too easy for you? That you cut through 195 levels and 22 bosses like wet toilet paper? Hardcore mode is for you. (Warning: do not attempt unless you are extremely hardcore!)

Years ago, something unforgivable happened to your father. It falls to you to find out what, and who. Every devastating power you gain, each artifact you enchant, and every duel you fight and win: each one brings you one step closer to your ultimate revenge.