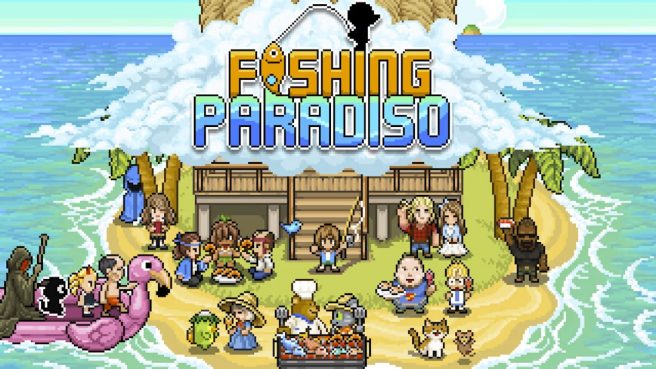 Odencat has revealed that it will be bringing Fishing Paradiso to Switch next month. The game, which is a spinoff of Bear’s Restaurant, is due out on June 2, 2022.

Below is some information about the game’s premise:

Bad news: you’re dead. Good news: at least you made it into Heaven!

When you first awaken in the afterlife, you find yourself on a tiny deserted island in the middle of the ocean. No pearly gates, no choir of angels to greet you—just a couple of palm trees and an annoying little bird to keep you company. For a place called Heaven, it sure doesn’t feel much like paradise. There’s no shelter to protect you from the elements, nor even any food to eat. In fact, the only thing here at all seems to be an old fishing rod lying down by the shore. Looks like you’re gonna have to learn how to fish.

Thankfully, you won’t have to go it alone for long, as you’ll soon be given access to your very own boat, as well as a fancy little doodad called a “skyPhone.” With this, you can plan out fishing expeditions, upgrade your gear, and take on requests from the various denizens of the afterlife. By fulfilling their wishes, you’ll grow closer to each of these friendly souls, and eventually, gain access to new fishing spots and even more interesting types of fish, with each step bringing you closer to uncovering the mysteries surrounding the legendary God Fish…

Fishing Paradiso is described as a narrative-driven adventure game with RPG-style progression systems. As players continue to fish, they’ll be able to explore new environments, take on new story objectives, and meet new characters (not to mention some that fans may recognize from Bear’s Restaurant). The game has over 100 different types of fish to catch, and dozens of upgrades to unlock. There’s even a new dining system known as Foodie Friends in which it’s possible to take friends out to lunch.

Completing tasks is a big part of the game, and players can finish side quests to forge deeper relationships with characters. And by completing certain quests, new furniture will be made available that can be used to rearrange a private cabana.

A trailer for Fishing Paradiso can be found below.