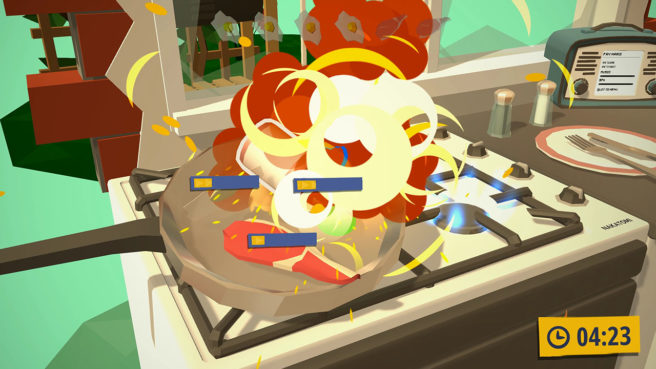 A listing on the eShop shows a new title from publisher Yogscast and developer Foggy Box Games. Brunch Club, a food frenzy party game, will release on Switch this month.

We have the following overview and trailer for Brunch Club:

In the main game you can play solo or work together with friends to complete the levels before time runs out! It doesn’t stop there though, online leaderboards mean that it’s not good enough to just complete when you can compete! Can you get the quickest time?

Each level has a mechanic inspired by the film from which it takes its namesake. Whether avoiding sniper fire in Fry Hard or waiting for the ever changing seasons in Game of Cones, each level will force you to adapt to achieve the quickest time possible.

We never said this was going to be easy! Its try, try and fry again in Brunch Club and it is an experience of hardship, if you make a mistake it’s game over and the level will reset! Communication, delegation and keeping your cool are all important to making sure you gain your well deserved victory.

Whether you play solo or with friends, we’ve got you covered. The more people you have the less time you have to complete the level, because more people makes it easier right? We’ll soon see about that.

Face/off will pit 2 players against each other in quick round based frantic food action to see who comes out on top. Do you try and complete the task as quickly as possible or attempt to interrupt your opponent? Friendships will be torn apart as you cook, jump and roll your way to victory!

It’s not just cooking in Brunch Club, we have other game modes for when the stress of the main games gets a bit too much. Whether you’re navigating your way through checkpoints in Five Second Rule or Slamming, charging and dodging your way to sumo victory in Riceball Rumble there is something for everyone.

With only simple controls needed Brunch Club on Nintendo Switch is ready for two player action as soon as you boot up the game! Now you can cook up a storm with a friend anywhere and anytime!