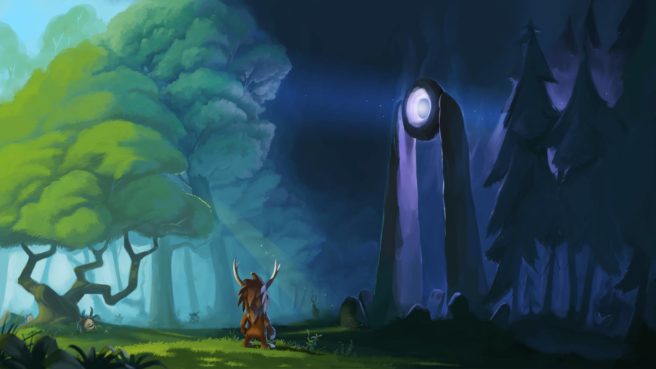 Forever Forest is coming to Switch, Fictive Studio and Mad About Pandas have revealed.

The title promises “a unique blend of exploration, survival, action and role-playing, condensed into a simple and intuitive gameplay.” We have more details and a trailer below.

Forever Forest is a unique blend of exploration, survival, action and role-playing, condensed into a simple and intuitive gameplay. Immerse yourself in beautiful colours and meditative melodies, while you explore a luscious, uncharted wilderness. Set forth on a journey to carry the last ray of light across stony deserts, treacherous swamps and poisonous lakes to illuminate a hidden world covered in darkness. Use your wits and skill to sustain yourself on colourful fruits and critters, hunt and be hunted by powerful beasts and permanently evolve by absorbing the abilities of your enemies into your mask.

Forever Forest is the result of a collaboration between the Qatar-based Fictive Studio and the Berlin-based developer Mad About Pandas, the successor of kunst-stoff. Over the last decade, Mad About Pandas established itself as one of Germany’s most resilient indie-studios and garnered a reputation for producing high-quality, award-winning games, including The Great Jitters: Pudding Panic. Meanwhile, Fictive Studio made headlines by becoming the first game studio and publisher in Qatar.

Forever Forest will be the first release from this collaboration. The game draws inspiration from around the world and will be available in Arabic, German, English and multiple other languages – targeting both MENA and Western Markets. It is the firm belief of all parties involved that uniting creative efforts and playing together across borders can shape our mutual respect and understanding. Forever Forest is only the begin of a long journey and lasting friendship, with new projects already being in pre-production.

An emotional journey about healing a broken world that takes six to eight hours to complete, embedded in a vast narrative about human hubris and living in harmony with nature.

A procedurally generated 3D world with a continuous change of landscapes and challenges to the north, and an unlimited expansion to the east and west.

A variety of different creatures that interact organically with each other and with their environment and require different tactics to defeat them in combat.

Berries and mushrooms of different shapes and colors provide nourishment and temporarily enhance abilities. Alternatively, players can hunt and devour other creatures.

New abilities can be acquired by collecting the masks of defeated enemies and trading them in at mythical shrines to prepare for the challenges that lay ahead.

Different habitats with their own vegetation, population and weather blend into each other to create eight distinct zones that shape the forest.

Dynamic lighting creates an additional challenge and requires players to move carefully in dark zones until they find the next temple of light and cast away the darkness.

The original goal was to have Forever Forest out sometime in November. That didn’t happen, but it should mean we’ll be seeing it on the eShop sooner rather than later.