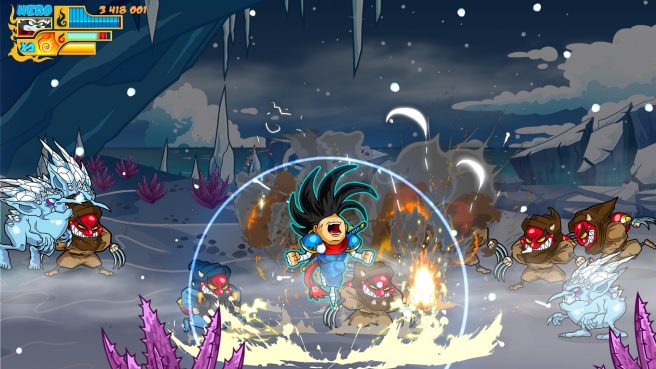 Here’s some information about Jitsu Squad as well as a trailer:

Jitsu Squad is an insane up to 4 player co-op Beat ’em Up Video-Game inspired by the golden age of arcade games!

Tanuki Creative Studio is recapturing the heart and raw essence of the arcade brawlers of the early 90s. Games like Final Fight, Streets of Rage, Alien vs. Predator hold a special place close to our gaming hearts. We grew up playing these games endlessly throughout the years and we still find ourselves coming back to the masterpieces we played when we all had missing teeth and cereal breakfast each morning.

Still to this day, it can be hard to find games that can compare to these classic masterpieces. Unknowingly these great memories from the past playing video games with friends bashing it out on the controllers and at times on each other planted the seeds for what was to become what we present to you today…

That’s why we Tanuki Creative Studio are on a mission to bring back heart into the genre! A hardcore game made for gamers, by gamers!

After years of plotting, drawing, singing along with videogame tunes and a lot of hard work, the idea for Jitsu Squad was startedto take form. Let’s make the NEW OLD-SCHOOL! Reawaken and re-invent the brawler genre that made ourlove with much passion & heart!

You can contribute to the Jitsu Squad Kickstarter here. There’s also a free demo to try out here.