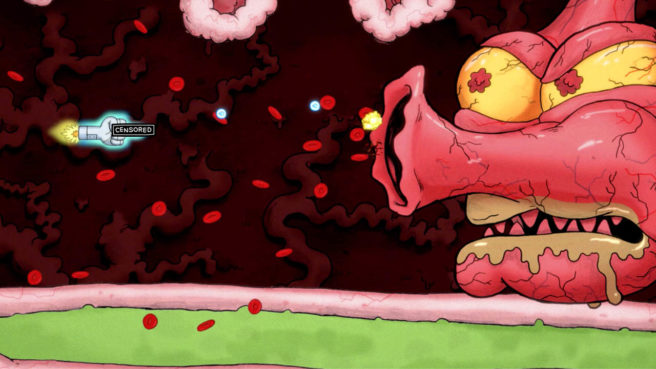 Freedom Finger, which was just announced for Switch during the Indie World Showcase last week, has secured a release date. The satirical, toe-tapping shoot and beat ’em up game will release via the eShop on September 27.

Here’s an overview of Freedom Finger, along with a trailer:

Freedom Finger comes from the mind of Emmy-nominated producer Jim Dirschberger and features art from Travis Millard. Players in Freedom Finger are tasked with the mission of rescuing the American moon research team that has been taken captive. Guided by commanding officer Major Cigar voiced by Nolan North (Bender from Futurama) the satirical and foul-mouthed trippy journey begins. Piloting the hilarious middle finger brandishing spaceship players will face rhythm-based chaos and explore a myriad of worlds some of which feel like a missing episode of Ren and Stimpy.
Freedom Finger – Punch ’em Up!

Lovers of shoot ‘em ups and beat ‘em ups will find something to love in Freedom Finger. Players can choose to shoot oncoming opponents, punch their way through, or grab enemies making anything their weapon. Players will also be able to discover new levels and paths based on the choices they make in the game, making each playthrough different from the last.

– Rhythm-based gameplay, enemies, bosses, and events are synced to the music
– Over 30 hand-drawn levels and 12 different worlds
– A blend of melee and shoot ‘em up combat, every enemy is a weapon, grab, toss, punch, and shoot your way through space
– Highly satirical story-line chocked full of hot button topics
– Choose your own difficulty, sit back and enjoy the music or crank up the difficulty for butt-clenching action
– A stellar cast featuring the voices of Nolan North, John DiMaggio, Sam Riegel, and Eric Bauza
– Jam-packed soundtrack with music from Aesop Rock, Red Fang, Power Trip, Com Truise, The Radio Dept, METZ, and many more