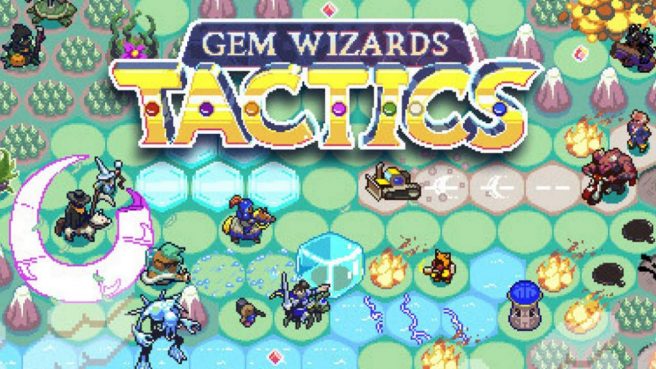 Publisher RedDeerGames and developer Keith Burgun Games have announced that Gem Wizards Tactics, a single-player turn-based wargame is coming to Switch. Check out an overview and the announcement trailer below the break.

The Business Demons have risen from beneath, and they’re here to frack, drill, pillage and burn everything in sight! Follow the tale of young Derby Pocket, a Business Demon Intern, who discovers the dark secrets of the OMNIGEM!

Playful tactics, weird magic, and endless challenge! Lead an army to liberate your people from an ancient evil in Gem Wizards Tactics!

Gem Wizards Tactics is a turn-based strategy game with randomly generated maps and weird asymmetrical factions! Designed around endless single player play, Gem Wizards Tactics has three factions each with their own unique abilities which not only combine within factions, but you can also pick up units from other factions and combine them into your army to create totally unheard of new strategies!

A new kind of single-player wargame
In many ways, Gem Wizards Tactics will feel familiar to fans of Advance Wars, Fire Emblem or X-Com. But unlike these games, the maps are randomly generated, and enemy units are spawning randomly as well. This means that the challenges are much less puzzle like, and a lot more emergent and surprising—so your strategies will have to be as well. In this original turn based tactical war game, you take your army through a series of battles in which you’ve gotta capture the flags before taking too many losses!

The Game Includes:
• Wild powers with fun and surprising side-effects! Drill for oil, which is slippery and lights on fire! Spray water around until you create new rivers! Freeze those rivers over with ice magic! Push people over the frozen ice floe, sliding uncontrollably into that hole you drilled! It’s like a wild Rube Goldberg Machine of tactics!
• Randomly generated maps! The map geometry, enemy squads you’re facing off, and Unit Rescue rewards are different every time you play!
• Three distinct factions with LOTS of asymmetry: the classic royal high fantasy knights of the Azure Order; the resource-exploiting, terrain-burning Business Demons, or the nature and weather-controlling Potatoes: each have their own unique playstyles and abilities. Better yet, there’s cross-pollination between the factions, so maybe you can find some neat combo for your Azure Knights sliding over a bunch of freshly fracked oil slicks! More factions coming soon!
• Twenty-six unique unit types, each with their own strengths, weaknesses, and unique special abilities! (More being added all the time in free DLC!)
• Four game modes are currently available: a short tutorial, a custom game mode, a longer-form Campaign that has you doing a long series of battles, leveling up units and permanently losing others! And finally, a “single-player Elo” mode called Ranked Mode, where the game automatically adjusts its rank as you win more games. More game modes coming soon!
• Colorful pixel art and an original melodic soundtrack.
• Lots of developer support in the form of new patches, balance changes and MORE: More factions, more game modes, more platform support – you name it! You may know about another game of mine: Auro: A Monster-Bumping Adventure. It originally launched on Android back in 2014, and we just put out another patch in Jan of 2021. The point is: I commit to my games pretty hard, and this game will get tons of awesome support in the future!

No release date for Gem Wizards Tactics has been announced.