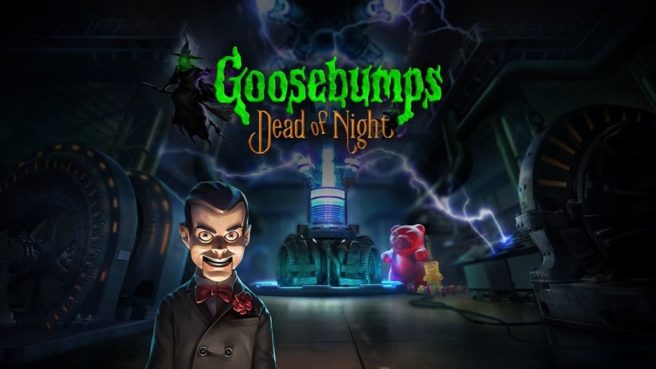 Here’s an overview of the game and the debut trailer:

In Goosebumps Dead of Night, the best-selling Goosebumps franchise has been reimagined as a first-person spooky survival adventure game. Experience three chapters of stealth gameplay with 3D graphics and chilling AI monsters.

Slappy the Dummy has unleashed a nightmare of Goosebumps monsters, and they’re all out to get you! Escape from frightening creatures like the Graveyard Ghoul, Lawn Gnomes, Annihilator 3000, Murder the Clown, and the Werewolf of Fever Swamp as you collect the scattered pages of Slappy’s book to seal him away. You’ll explore infamous Goosebumps locales for clues, hide from monsters, and solve Slappy’s devious puzzles.

It’s up to you to stop Slappy’s evil plan to unleash his monsters across the world… don’t worry, you’ll have some allies along the way like Nikola Tesla, Dr. Brewer and R.L. Stine, voiced by Jack Black. For the faint of heart, beware—you’re in for a scare!

Goosebumps: Dead of Night is slated to launch on Switch this summer.