Graphic novel adventure Monster Loves You Too! heading to Switch 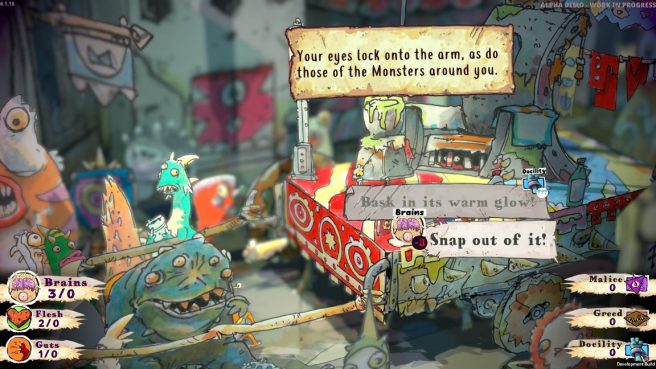 Dejobaan Games and Radial Games have announced Monster Loves You Too!, the sequel to their 2013 title Monster Loves You! – and it’ll be released on Switch. The graphic novel adventure is set to arrive this December.

Monster Loves You Too! is a young adult story about growing up in a mystical land of monsters. Further information can be found below.

You are born in the city of Asch and find food, forge friendships, and fend off bigger monsters, all while resisting your own monstrous urges to cheat, steal, kill, and lie at every turn.

YOUR INSTINCTS: You emerge from a gooey vat, starving, naked, and alone. You wander the back streets of Asch, the monster metropolis, struggling to survive. Like your fellow monsters, you’re plagued by vicious instincts. And it’s comfortable to give into those instincts—your GREED stat makes it easier to hoard valuables than to share; your MALICE makes it compelling to attack the weak just for the thrill; and your DOCILITY forces you to lie around when you could be working.

YOUR STRENGTHS: But you represent an unexpected branch in monster evolution. You have reserves of BRAINS, GUTS, and FLESH, which you can expend to overcome your base instincts. Maybe you’ll use your BRAINS to persuade a group of warring orphans to band together. Or you’ll spend some GUTS points to boldly challenge a dangerous wolverine. Marshall your reserves carefully, though, because if these precious resources run dry, you won’t be able to resist the urge to tear a friend’s arm off when you’re hungry.

YOUR LIFE: Grow up, grow old, and maybe even grow wise. Make friends, allies, and enemies. Break out of the slums, assemble your own gang, explore the wilderness, and unravel the political intrigue keeping monsterkind from clawing out of the pit of brutality. Monster Loves You Too! is the story of your life told over months, years, and the next century.

We’ve attached a trailer for Monster Loves You Too! below.