Posted on October 3, 2022 by Nicolas in Switch, Switch eShop 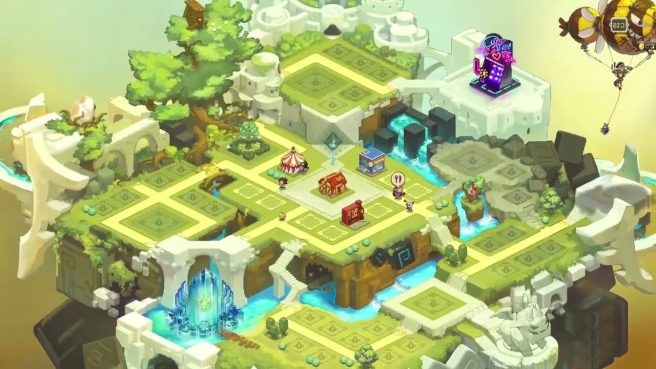 Kong Studios has released a launch trailer for their free-to-play retro-style JRPG, Guardian Tales. The game is releasing today on Switch.

Here is an overview for the game:

Single Player Story Mode: This is the signature mode of Guardian Tales, where players must solve different puzzles to uncover secrets and fight monsters to clear missions.
Guilds: Players can join a Guild with others after progressing through some of the story. There are different events guild members can take part in, like Raids for ranking regards, Meteor Excavation for items, and Guild Conquests, where players fight to win as many rewards as possible.
Customizable Floating Castle: Build up your base of operations at Heavenhold. Players can enjoy different foods and entertainment unlocked throughout their playthrough.
Hero and Weapon Collection: It’s dangerous to go alone! Collect and choose from over 100 different weapons – each with its unique abilities.
Puzzle Solving Gameplay: Lift heavy boulders, throw explosive bombs, and sling yourself across obstacles to discover hidden pathways to amazing treasures!
Intense PvP and Rankings: Assemble and synergize your best party of three heroes to face others in real-time in combat for glory!

Players that log into Guardian Tales throughout October will also receive the following in-game rewards:

Guardian Tales will be available to download through the eShop starting at 7 PM PT / 10 PM ET.