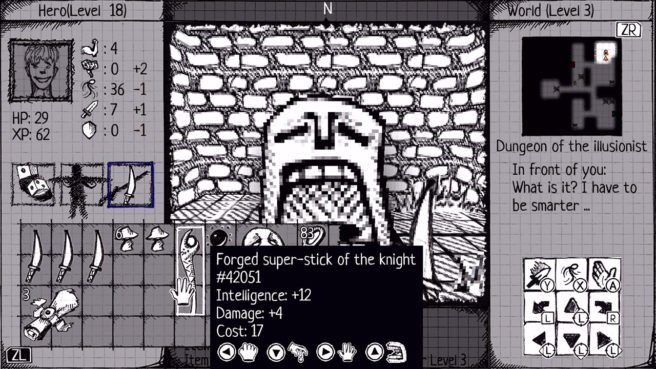 DarkDes Labs’ hand-drawn RPG Drawngeon: Dungeons of Ink and Paper is coming to Switch, according to an eShop listing. Drageus Games will be publishing the title on December 13.

Here’s an overview of Drawngeon, along with a trailer:

The Mysterious Tower suddenly appeared, waiting for heroes to beat its challenges. Choose your class and take up the quest in a unique hand-drawn RPG.

Life went on as usual in the Inkland… until the Tower fell straight from the sky! Many heroes tried to solve its mystery, but none of them succeeded. It’s your turn to prove your worth.

Choose your class – warrior, magician or rogue – each with their own strength and abilities. Loot and buy items, fight with various weapons, create and cast powerful spells. All the ingredients of a good role-playing game are there, but with a unique real-time combat based on grid movement – like on a piece of paper! The hand-drawn graphics especially fit the dark and old-school heroic fantasy settings.

Drawngeon is a RPG adventure that can also be played in short gameplay sessions, thanks to the procedural generation of dungeons, caves, forests and items you will find as you progress and develop your character.

• Procedural generation of locations and items.

• Three classes of heroes – each with its own play style.

• You are able to eat items!

Drawngeon: Dungeons of Ink and Paper will cost $4.99 on the Switch eShop.