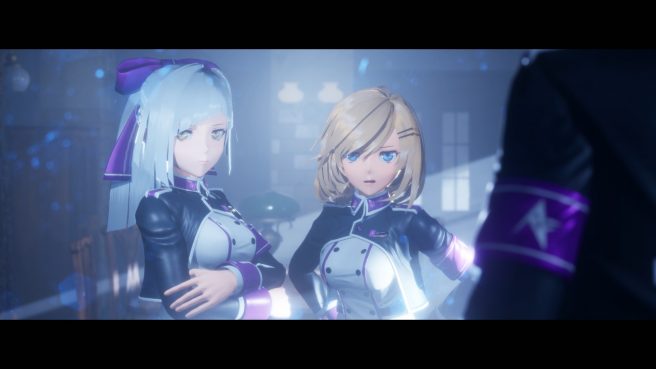 Clouded Leopard Entertainment and Production Exabilities have announced that Wing of Darkness, a high-speed 3D shooter, is heading to Switch on February 25, 2021.

Japan and Asia will have physical versions, including a limited edition. The latter release features a special box, the original soundtrack, pins, a crest, an acrylic figurine, a B5 sticker sheet, visual fan book, and one last item to be announced.

We have the following overview and trailer for Wing of Darkness:

This project is a labor of love by a small, yet spirited team of game industry professionals whose vision is to deliver the highest-quality entertainment.

Production Exabilities’ debut release is a 3D shooter focusing on stunning visuals, with a moving musical score and story to match. The game is comprised of two elements: an exhilarating action segment, followed by a cutscene depicting the inner perspectives of the two main heroines.

In Wing of Darkness, you play as a Fraulein: a young woman battling against hostile invaders known as Blankers. The game is comprised of two elements: an exhilarating action segment, in which the player flies through beautifully rendered skies, shooting down enemies with a never-ending supply of ammunition, followed by a fully-voiced cutscene wherein the two main heroines act as the narrators, depicting the war from their perspectives.

Young women prepare to take flight. For themselves, and for the whole world…

An unknown enemy, the Blankers, have completely changed the nature of combat. Now, war has become a game for the survival of mankind.

Nothing can defeat the Blankers except the Held System, a state-of-the-art weapon, and the Frauleins, the young women are uniquely disposed to using them.

This means that Frauleins are humanity’s last hope. They must be prepared to face their greatest fears as they take flight against the enemy.

If they don’t fight, mankind will be wiped out. But in doing so, the Frauleins will lose something very dear to them…

This is a story of what it means to truly be human, told through the eyes of two brave young warriors.

Take to the skies as a Fraulein!

Enjoy zipping through the sky in all directions with simple gameplay controls.

Ammunition replenishes itself gradually over time. Choose your weapon before each mission and experience the exhilaration of shooting down powerful enemies without any restrictions.

The various missions depict stylish aerial combat with laser weapons and missiles. The sky’s the limit!

A tale of war and two girls.

Cutscenes take place before and after the action sequences. The story is told in a reminiscent narrative that alternates between the perspectives of the two main heroines, Klara (voiced by Kiyono Yasuno) and Erika (voiced by Chihira Mochida).

The story begins when two young women from complete opposite backgrounds meet.

At first, they dislike each other, but they eventually grow to respect one another, coming together to fight against the unknown threat of the Blankers, as well as the mystery surrounding the Fraulein military program.

The full opening and ending songs sung by the two lead voice actresses.
An original soundtrack containing voiced stories depicting the daily lives of the two protagonists.
A visual fan book with many models of the two main characters and enemy aircraft, as well as a lyric sheet and an original voice drama, all of which will be fully localized into traditional Chinese and Korean.
Patches and pins bearing the in-game squad emblem.
A variety of other bonus items only available in this version.

Wing of Darkness will cost $29.99, though the limited edition will go for $84.99. English, Japanese, Chinese (Traditional and Simplified), Korean, French, Italian, German, and Spanish subtitle language options will be included with Japanese audio.