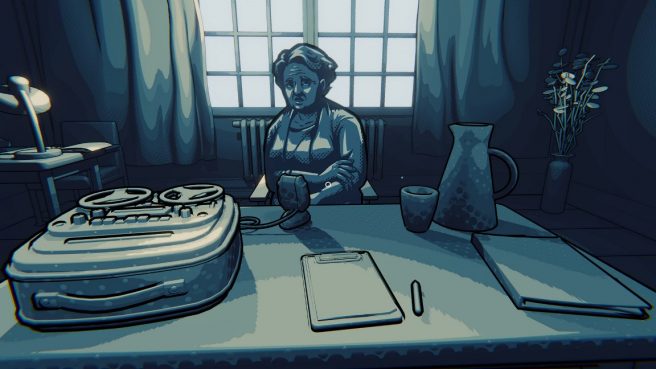 Paintbucket Games today unveiled The Darkest Files, a spiritual successor to the Nazi resistance title Through the Darkest of Times. We’ll be seeing it on Switch sometime in 2023.

The title is both a historical investigation and court room game. Further information can be found in the overview below.

In The Darkest Files, players take on the role of Esther Katz, a young prosecutor living in West Germany in the 1950s. She is part of the team around the Frankfurt Attorney General Fritz Bauer. As Esther, players investigate crimes committed by former Nazi officials, collect evidence, question witnesses and ultimately bring the perpetrators to justice. The game leads players on a gripping, emotional journey through the crimes and dark times of the Nazi era.

– Players search investigative files from the Nazi era for clues, and interrogate relatives, witnesses, and suspects to find out the truth.
– Players draw conclusions, evaluate evidence, and reconstruct the crime in real time.
– Players interview witnesses and suspects, diving into the statements in immersive-mode to better understand the actions of the perpetrators and uncover any clues and contradictions.
– Then, players discuss their findings with their team of investigative experts in order to build an air-tight case.
– Players must determine and press the correct charges and have the criminals arrested.
– Finally, they need to convince the judiciary to reveal the truth and bring the perpetrators to justice.

“After Through the Darkest of Times, we decided to stay in the realm of history for one of our next games – especially since current events continue to concern us deeply,” explained Paintbucket Games’ Jörg Friedrich. “We decided to move chronologically to the period after World War II, when many former Nazis were still active in high-ranking positions all over West Germany. Fritz Bauer and his team did immensely important work during this difficult time by pressing charges against numerous criminals and publicly trying them for their crimes. Through their work, they made a lasting impact on how Germans understand the National Socialist period and the Holocaust and helped create the social consensus of: ‘Never again!’ We want to give our players a view into this difficult and fascinating work with The Darkest Files.”

The first trailer for The Darkest Files can be viewed below.