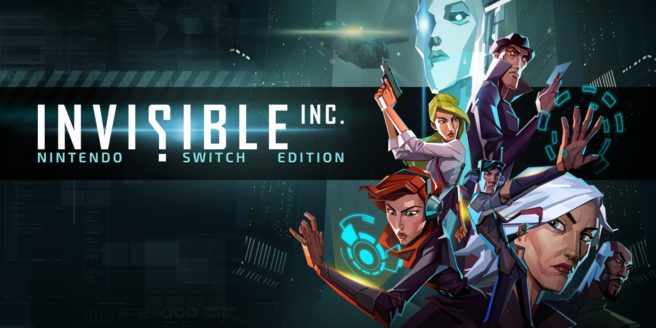 Don’t Starve and Mark of the Ninja developer Klei Entertainment has just brought another one of its games to Switch. The turn-based tactics stealth title is out now on the eShop.

Here’s an overview of Invisible, Inc., along with a trailer:

Tactical Espionage. Take control of Invisible’s agents in the field and infiltrate the world’s most dangerous corporations. Stealth, precision, and teamwork are essential in high-stakes, high-profit missions, where every move may cost an agent their life.

Key Features
– Character selection: Start with any of the 10 unlockable agents in the game, plus 6 agent variants, and 6 starting programs to crack corporate security.
– Deep customization of builds: each play through is different as you create your own strategy using agents, items, augments and programs, and adapt to your surroundings.
– Randomly generated world: locations, threats, and loot are randomly generated so each playthrough is vastly different and you’ll never get complacent.
– Choose your own game mode: with 5 different game modes and extensive custom generation options, each player can play the way they prefer.
– Includes the Contingency Plan DLC, which is an expansion that extends the campaign time and adds new rewards, agents, programs and danger to the base game of Invisible Inc.