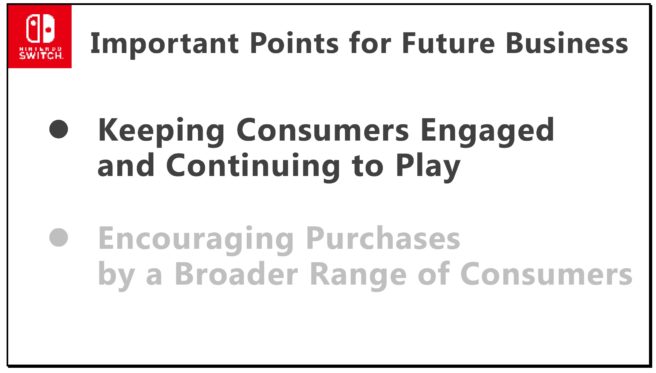 In the dedicated video game platform business, the second year is all-important. The second year is when the novelty has worn off and the hardware is truly put to the test. During this fiscal year, we will take advantage of the stage we set in the first year to further expand the installed base.

To expand the installed base of Nintendo Switch, there are a number of points to consider. The first is our goal of
keeping consumers who have purchased or plan to purchase Nintendo Switch engaged and playing with Nintendo Switch.

It is important that we deliver new titles in our key franchises to all game fans and Nintendo fans who purchased Nintendo Switch during the first year. That is why we announced in a Nintendo Direct presentation in March that we would release Super Smash Bros. (temp.) in 2018. We heard people clamoring for this series to come to Nintendo Switch, so the title announcement in March made a big splash.

Mario Tennis Aces, due out on June 22, is another important title that meshes with the advantages of the Nintendo Switch hardware as a title that consumers can continue to enjoy in ways that fit their different styles of play “anytime, anywhere, with anyone.”

This title is perfectly suited for the Joy-Con sharing feature of Nintendo Switch and people can begin competitive gameplay at anytime anywhere. There is a “swing mode” where the Joy-Con controllers can be used intuitively like a tennis racket using motion controls. There is also a “story mode” for a different kind of singleplayer tennis fun. Plus there will be events designed to promote online battles as a way to keep up interest in the title. This is a broadly accessible title that anyone can pick up a play, but it also offers a tactical depth that can keep players challenged. This is one of the titles we expect will play a key role during this fiscal year. 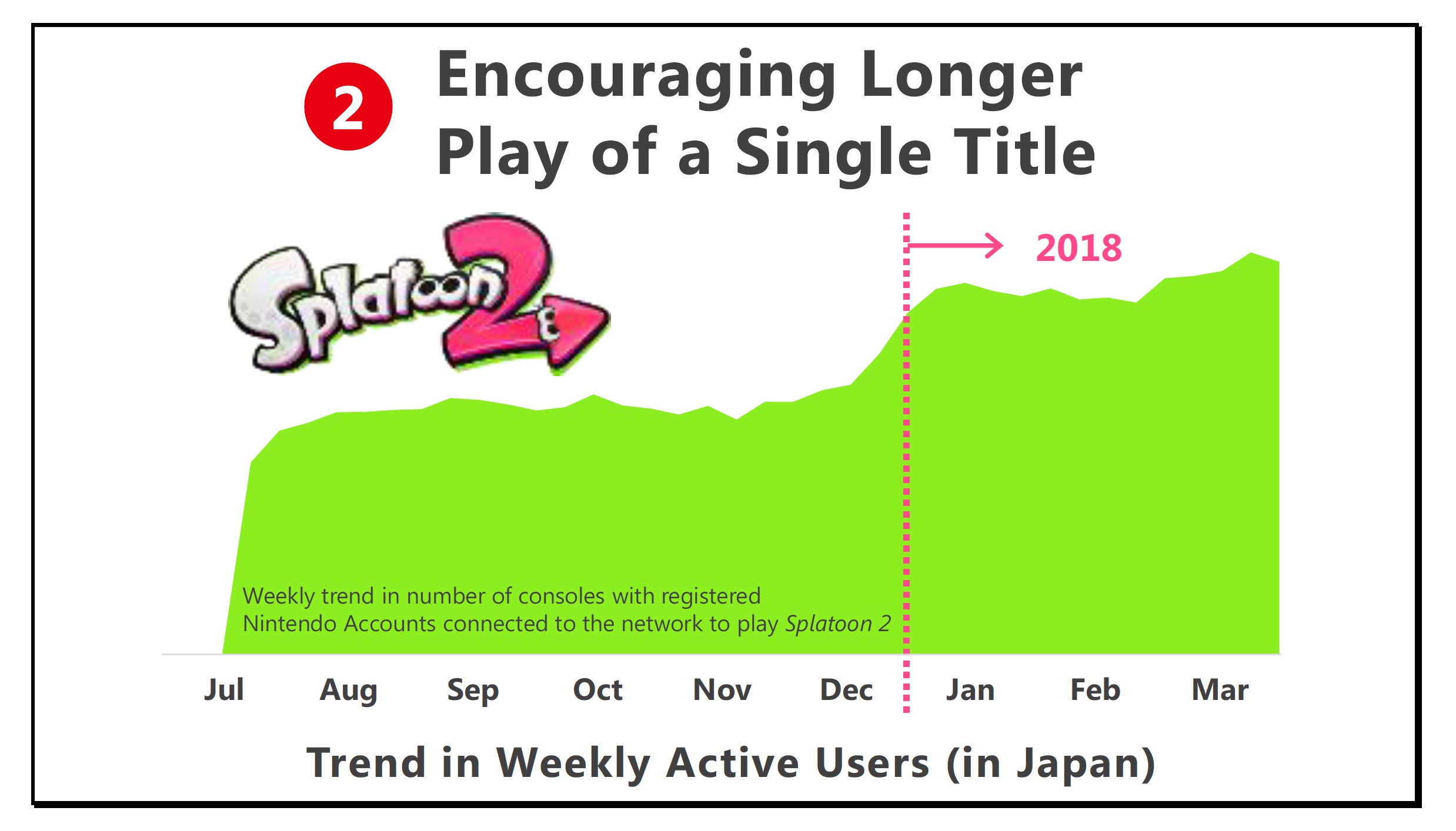 We are providing more downloadable content and hosting events that build excitement for our games to give consumers a fresh sense of enjoyment and extend the time they spend playing the titles they have purchased. The way Splatoon 2 is being played in Japan is an example of how efforts on the game software side can also impact the use of the hardware. The vertical axis of this graph depicts the number of active users over the passage of time across the horizontal axis. Normally, hardware use tends to drop off to a certain extent after the holiday season, but with Splatoon 2, the weekly number of active users remained high even beyond the start of the new year. Activity in Splatoon 2 is particularly high in Japan, but that same trend is now also being seen in other markets, so we intend to continue to focus on this area.

Octo Expansion for Splatoon 2 will be available this summer as a major paid add-on content release. It will give consumers who purchased this title even more ways to enjoy the game.

For titles like ARMS and Splatoon 2, we have had large turnouts worldwide at Nintendo-hosted game contests and events that bring game characters to life in the real world.

For fans, game contests are more than just a place where they put their practiced skills to the test in gameplay. It is also a place where many people can come together through a single game to socialize and feel the energy of the community. And the gathering, in turn, fuels excitement in the game. We intend to continue to investigate fun projects, including these sorts of experiences that go beyond gameplay, to keep as many consumers as possible interested in our products and enjoying individual games far into the future.