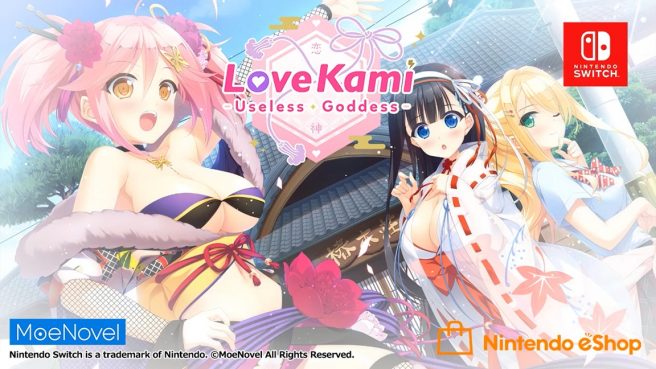 LoveKami: Divinity Stage made it to Switch last November. MoeNovel is following up on that with another release, LoveKami: Useless Goddess. It will launch on June 24.

Here’s some information about the title as well as a trailer:

It was after the descent of uncountable goddesses in Japan…

Most goddesses were able to blend in with humans, living peacefully and happily together. Some of those goddesses even went on to become idols.

However, there were others who simply refused to follow the rules. These goddesses prefer living freely and doing as they please, inadvertently causing all sorts of trouble for humans.

Goddesses who are naughty are called Aragami.

The protagonist, Sho Narumi, stumbles upon a goddess who collapses on the street and attempts to help her. Soon enough it is revealed that she’s the Aragami who had been causing frequent power outages in one small-town area of Tokyo. Sho decides to protect his beloved hometown by helping the goddess to get rehabilitated!

With the setting moving from Akihabara to a quiet small-town area of Tokyo, the story of one naughty goddess’s rehabilitation begins now!

LoveKami: Useless Goddess will be sold digitally for Switch via the eShop.