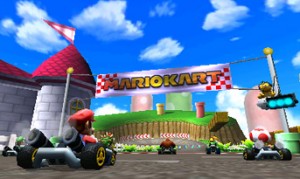 I don’t know what that title means, but Mario Kart 64, when I was a kid, seemed like a bit of a magical venture. The courses, music, and multiplayer functionality were just too good to be true at the time, but as I grew older I began to appreciate more the subtleties with which the games were created; from drifting and drafting, to the distribution of items and item effects. When I sat down (errr.. I think I was technically standing up) with Mario Kart 3D today, 19 years after the original released for the SNES, I came to a very happy conclusion: It’s mostly more of the same, but that’s definitely a good thing. 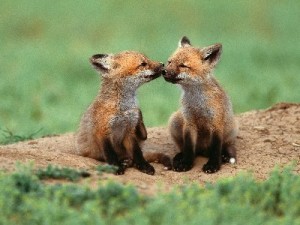 It wasn’t the one about the foxes though, I swear.

But what surprised me about Mario Kart 3D is that, bar none, it’s probably the single game in the series that has shaken up the formula more than any other for two reasons: You don’t just stay on the ground, and you can customize your kart. Let me explain:

In Mario Kart 3D, some courses will have jumps that lead one of two places: into the air then onto the ground, or into the air then into the water. If you go off the first of these two types of jumps, your kart sprouts a hang glider and you magically soar through the air like a sort of flying squirrel or, more appropriately, a person on a hang glider. On the second of these two types of jumps, you’ll land in the water, fall through it and onto the ocean floor, whereby your kart gets a little propeller and you continue your race with the bubbly physics of the sea. Ultimately, this doesn’t really add all that much to the gameplay- you’re still just racing, after all- but it is a nice aesthetic change, and as The Legend of Zelda has taught us, sometimes that is enough. 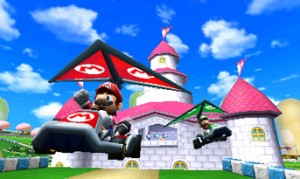 As far as kart customization, don’t get too excited because it’s not Need for Speed or Forza with a thousand customizable parts. Upon kart selection, you can choose your character, the body of the kart, the wheels, and the hang glider type. These four things, when combined correctly, can create some pretty deadly karts, but if you’re like me and you just chose the biggest wheels available because they “looked funny”, you probably won’t get anywhere with this feature.

Ultimately, I really enjoyed Mario Kart 3D. It looked great, played great, felt great, and ran at a silky smooth 60 frames per second, which is a godsend for fast paced games like this. The only issue I can see upcoming is simply that the people who didn’t like Mario Kart before won’t really change their mind based on this iteration. Sure, it does a few things differently, but ultimately it’s still the same old Mario Kart that we know and either love or hate at its core. But hey, sometimes that’s more than enough.