Metaloid: Origin getting a physical release on Switch 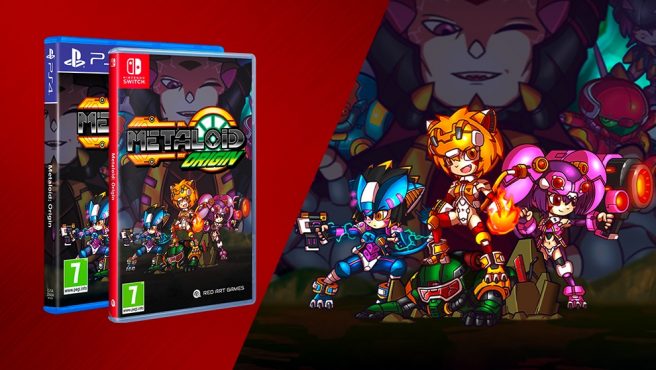 Red Art Games today pulled back the curtain on its latest physical release for Switch, with Metaloid Origin now getting the boxed treatment.

For more on Metaloid: Origin, read the following overview:

Metaloid: Origin is the sequel to the run-and-gun classic Metagal! Take control of 3 “Predator” androids as they defend their world against Lucian Corp’s robot army. Each playable character offers distinct advantages. Erika can flood the screen with bullet fire, Zeta uses atomic thunder to strike hard and fast and Neva flies across levels and attacks from above thanks to her jetpack. As one of those warriors, you’ll have to go through forests, deserts, caves and snowfields to stop the invaders before they drain the planet’s resources and fuel a galactic war! Use Soulrium dropped by defeated robots to unlock new weapons at any time, and gain the power needed to take down formidable bosses.

● Select between 3 android warriors with unique abilities.
● Dash through 9 levels with varied biomes!
● Collect Soulrium to purchase new powers and equipment.
● Choose between multiple difficulty settings.
● Enjoy a fresh new soundtrack from the composer of Metagal!

Metaloid: Origin originally launched for Switch in 2019. This marks the first time the game will be offered physically.