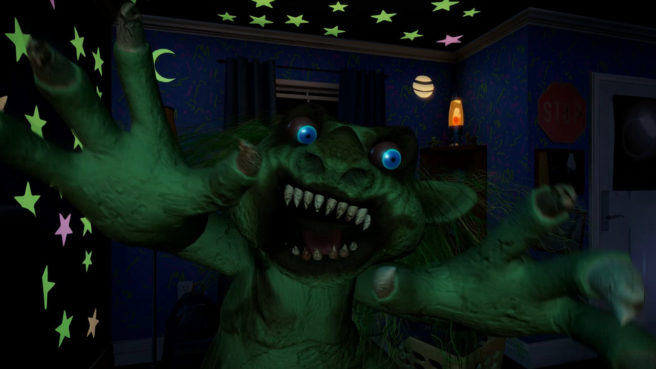 Back in August, the first-person horror game Midnight Evil was announced for Switch. An eShop listing now shows that it will arrive on October 10.

Here’s an overview from the eShop listing, along with a trailer:

It’s late at night, and you’ve discovered a mysterious book that seems to have its own evil agenda. As you begin to read through it, you realize that you are not alone – the monsters are coming. The only way to free yourself from this fiendish nightmare is to keep reading… and finish the book.

Midnight Evil is a story-driven first-person horror game where you play William Crinkle, a child who is being attacked by goblin-like creatures known as Urklings – beasts with a taste for the flesh of children. Spotting the monsters in time will banish them for a while, but they can only be defeated by reading the text within the book that binds them.

Can you survive the night?

– A spooky narrative about ancient beings!

– A charming and cheesy 80’s horror environment with comedic relief!

Midnight Evil will cost $9.99 on the Switch eShop.