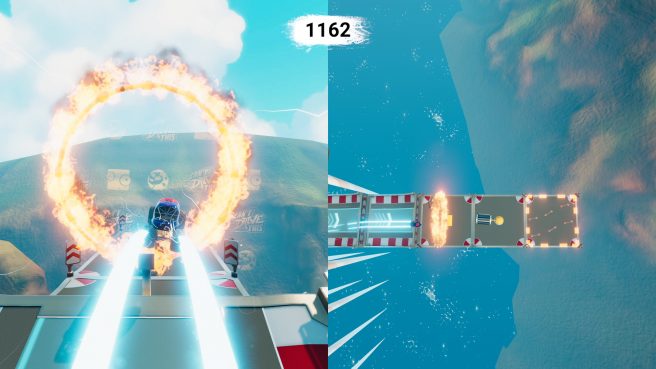 Pixel Maniacs has announced that Can’t Drive This, its multiplayer party racing game, is on the way to Switch. The game is launching digitally on March 19.

Here’s an overview of Can’t Drive This, along with a trailer:

Can’t Drive This is a competitive co-op (it’s a thing) multiplayer party racing game. Drive your monster truck WHILE your friend builds the road in front of you! Oh, and don’t go too slow, OR YOU’LL EXPLODE! Like in that Sandra Bullock movie, in which she kinda does the same thing, but on a bus. Also, she doesn’t explode (Spoiler alert). Also, Keanu Reeves was in the movie.

Play local face-to-face couch co-op, with your best frenemy! Grab some friends and some controllers, and go destroy those friendships! (We probably should, but do not take responsibility for any damage to your interpersonal relationships.)

If you don’t have any friends around, play single-player, or find some random internet-person to play with! Experience the joy of playing Can’t Drive This without that annoying smelly friend next to you. You know the one I’m talking about.

Customization!
Where’s the fun in online multiplayer if there’s no customization, you ask? A very intelligent question, you beautiful person! Can’t Drive This features a gazillion* unlockable parts and a vehicle editor so you can show off your awesomeness to everybody! But as we all know, only one player gets to drive a car at a time. The other player builds the road. That’s why we also included a road editor! Create your custom track and have your friends race on a gold-plated yellow brick road, if that’s your jam!

Yes! Finally! We have a release date! 🥳

Please help us with a retweet to spread the word!❤️

Can’t Drive This will be sold digitally for Switch via the eShop.