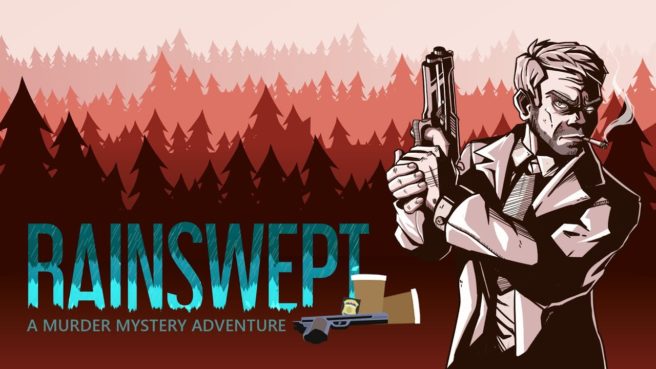 2Awesome Studio has announced that Rainswept is coming to Switch this month. The title will be out on July 24.

Rainswept is a murder mystery adventure game made by Frostwood Interactive. It’ll include all the content of the original version plus a newly crafted control scheme and revamped save system.

Here’s an overview of Rainswept, along with a trailer:

Rainswept takes you on an emotional adventure in a small town affected by a double shooting. Join Detective Stone and unravel entangled threads of love, relationships and unresolved trauma in this character driven murder mystery game.

Detective Michael Stone arrives in the small town of Pineview to assist the local police force with a seemingly simple case – A couple is found dead in their kitchen. The locals believe it to be a case of murder-suicide, their speculation fueled by rumors of the turbulent nature of the couple’s relationship.

Help Detective Stone, assisted by the driven and empathetic Amy Blunt, discover the truth behind Chris and Diane’s story. But be warned: the further he pursues the case, the more his own past shall come back to haunt him. And the closer his sanity will be pushed to the edge.

Rainswept Key Features:
– An emotionally captivating story set in an immersive and atmospheric game world.
– A wide cast of characters with deep histories, meaningful motivations and distinct personalities.
– An original detective noir story in the tradition of Twin Peaks, Luther or Memories of Murder
– A moving original soundtrack by Micamic (Downfall, The Cat Lady, Lorelai).
– Pine trees, coffee and rain. Lots of rain.