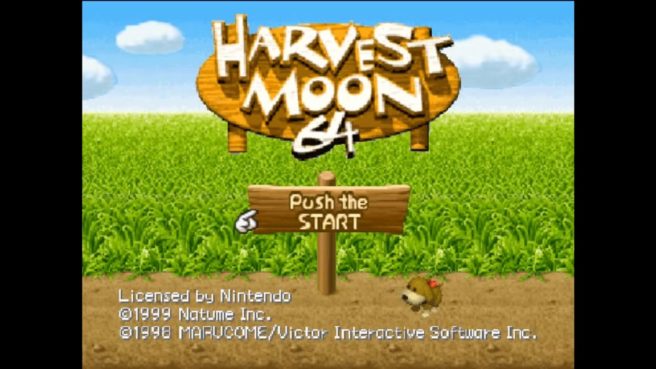 When Harvest Moon 64 originally came out many years ago, it came with a bit of a noticeable spelling mistake. On the title screen, Natsume’s name was written as “Natume”.

The error has been back in the news due to the recent release of Harvest Moon 64 on the Wii U Virtual Console. In its latest “State of the Farm” update, Natsume thought it would make sense to explain why it happened in the first place.

“With the recent release of Harvest Moon 64 on the Wii U Virtual Console in both North America and Europe, let’s answer that one important question everyone has been talking about for 17 years: What’s up with the spelling of ‘Natume’ on the title screen in Harvest Moon 64?!

Back when Harvest Moon 64 was being worked on, technology was very different. The Internet, email, data transfer, etc. weren’t the everyday tools they are now, so communication with Japan took a bit longer and was a tad more primitive than it is today. Unfortunately, the correction request on the title screen had fallen through the cracks, and when this was discovered, the title had already been approved by Nintendo and was set to go to production.

The problem? Fixing it would have delayed the game by at least 45 days, pushing it out of December! Yikes! Sorry, no Harvest Moon 64 for Christmas and instead, a February release. So, it was decided that we would rather let our fans have a very Merry Christmas and a Happy New Year planting crops and talking care of animals instead of being a Grinch for a simple ‘s’. The funny thing is, Natume is a legit way to spell Natsume in some versions of romaji. And now you know the story!

Natsume later mentioned that it has “big” plans in store for E3, more celebrations for Harvest Moon, and “surprises” for other franchises. We’ll have to wait and see how much of that turns out to be Nintendo-related.