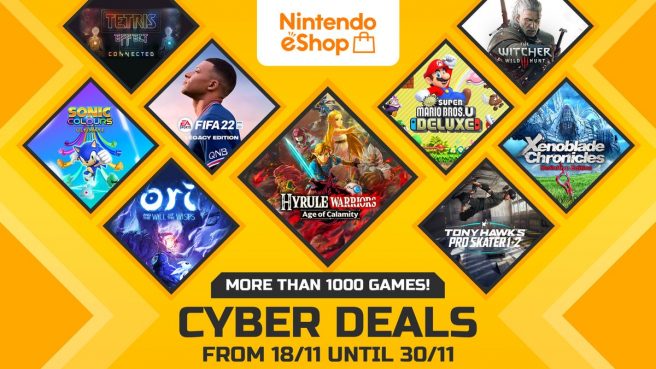 The 2021 Cyber Deals Sale will kick off on the European Switch eShop on November 18, Nintendo has announced. Over 1,000 titles will be included, and fans can save up to 75 percent.

Some big games will be included such as Hyrule Warriors: Age of Calamity, which will be discounted for the first time. A number of other notable releases will be here as well like Pikmin 3 Deluxe, Dragon Quest XI S, New Super Mario Bros. U Deluxe, Tony Hawk’s Pro Skater 1 + 2, Tetris Effect: Connected, and more.

Below are the full highlights from the upcoming 2021 Cyber Deals Sale on the European Switch eShop:

You’ll be able to look through all of the games included in the 2021 Cyber Deals Sale European Switch eShop sale here.

Nintendo has thus far not announced what it’s plans are for North America. If last year is anything to go by though, we should be seeing a similar sale in the states soon.