Nintendo on its best-selling Switch games 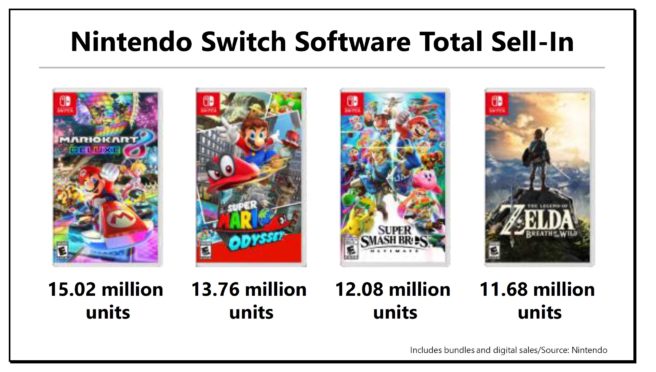 As was posted on our official website yesterday, these are the four Nintendo Switch software titles with the highest total sell-in. Super Smash Bros. Ultimate, which was only just released in last December, has already joined this lineup after less than a month since its release by selling over 10 million units, an amount that other popular titles have taken years to grow into. Pokémon: Let’s Go, Pikachu! and Pokémon: Let’s Go, Eevee!, released during the holiday season last year, are ranked fifth in total sell-in, while Super Mario Party, released during the same period, is in seventh position. Each of the new titles released in succession during the holiday season sold at an unprecedented pace. Looking back on this holiday season, I feel that we have managed to further enhance the Nintendo Switch software lineup consumers all over the world were looking forward to playing and would recommend them to the people close to them.

Note: Sell-in refers to units sold to retailers from the Nintendo group of companies