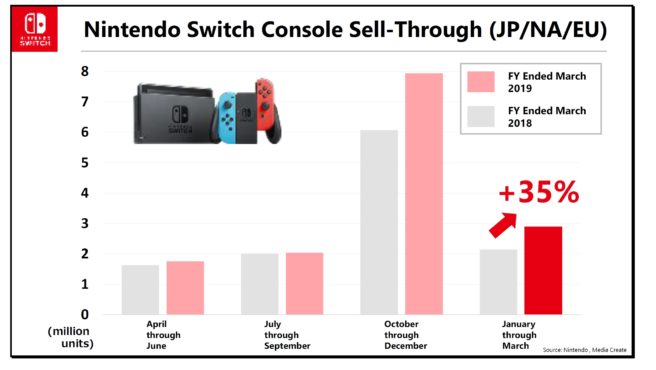 I’ll start with the current state of the Nintendo Switch business. Nintendo Switch has continued to gain momentum after January subsequent to the holiday season. Business is going well, and we expect continued growth. Let me discuss these points in order.

As mentioned at the February corporate management policy briefing, sales of the Nintendo Switch system were strong during the holiday season, and sell-through has continued to be solid through the start of this year. This slide shows combined sell-through for the Japanese, North American, and European markets. As you can see, sell-through from January to March was 35% higher than the same period of the previous year. 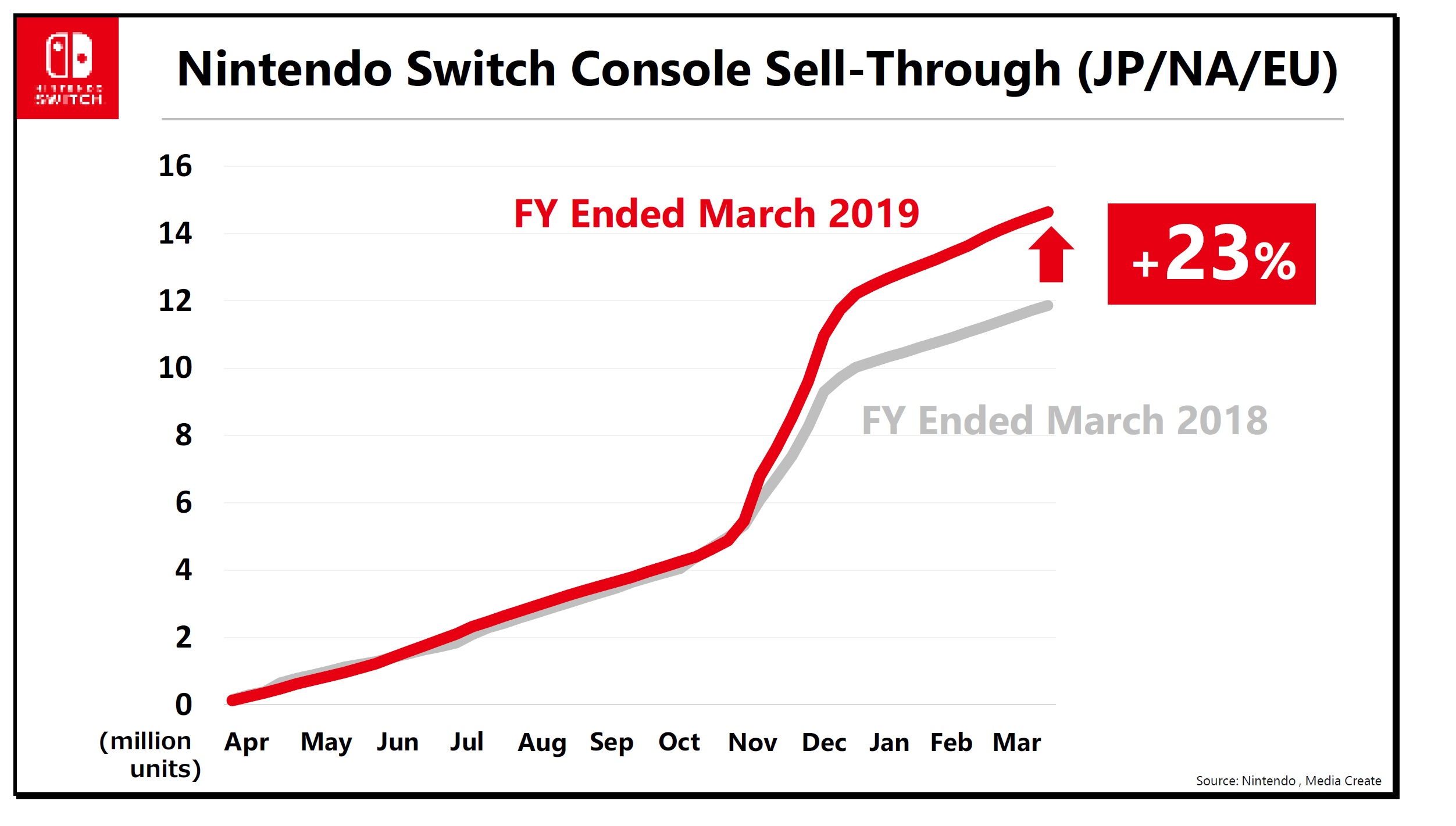 This graph shows cumulative sell-through trends throughout the full fiscal year combined for Japan, North America, and Europe. The fiscal year ended March 2018 showed explosive sales for a first year of hardware sales. The fiscal year ended March 2019 kept up that same pace until the beginning of autumn, before rising even more sharply in November. As a result, we saw a full-year increase of 23% over the previous fiscal year. And since the start of the third year of Nintendo Switch this March, the momentum of the business is still increasing. 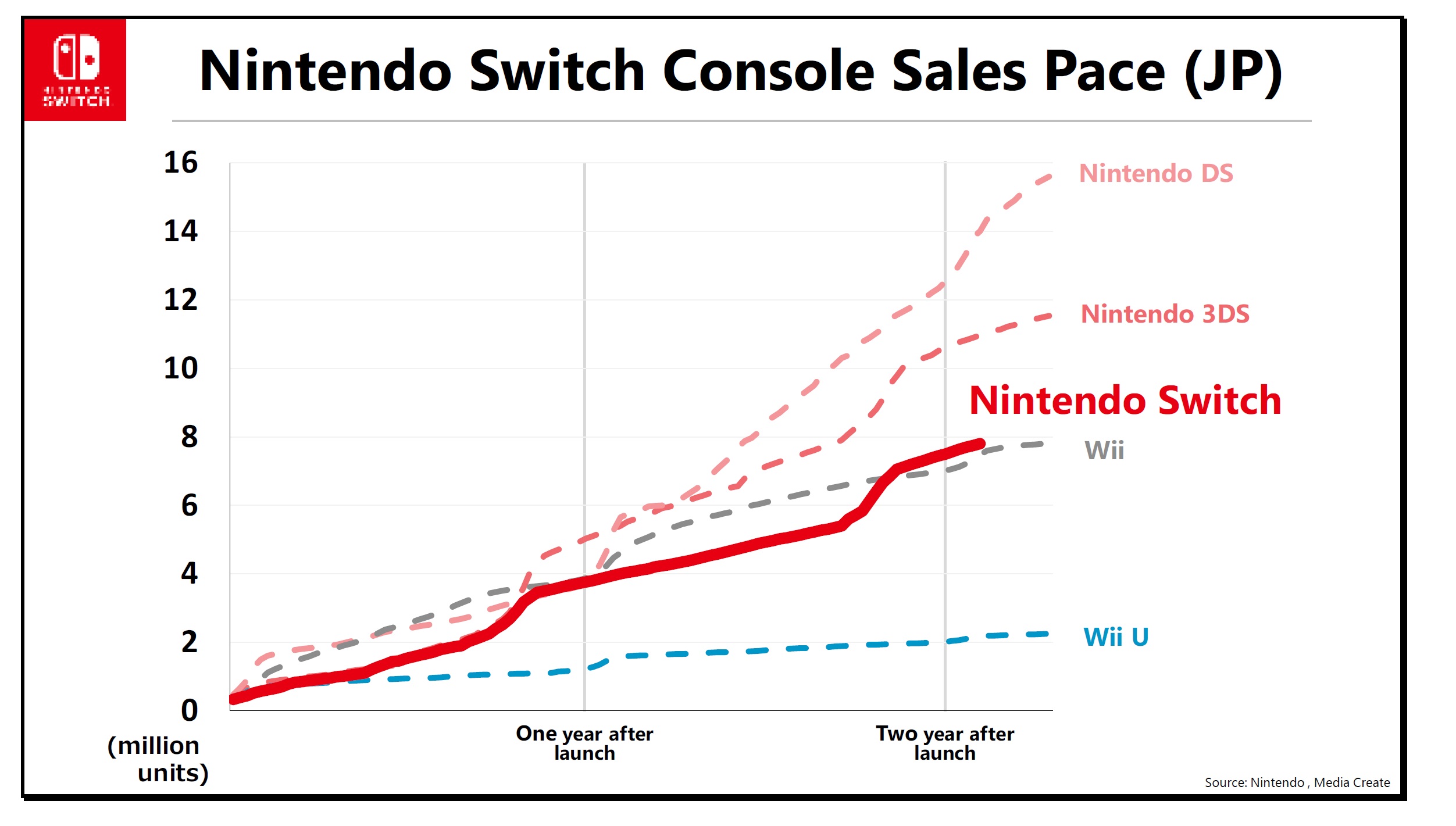 This graph shows changes in cumulative sell-through in the Japanese market following the launch of Nintendo Switch. The total hardware sell-through for Nintendo platforms from Nintendo DS onward is superimposed on the graph for comparison. Note that the quantity and timing of holiday seasons that see large sales increases will differ according to the different launch dates. Within Japan, Nintendo Switch is not reaching the pace of expansion set by Nintendo DS and Nintendo 3DS, but has outpaced Wii. 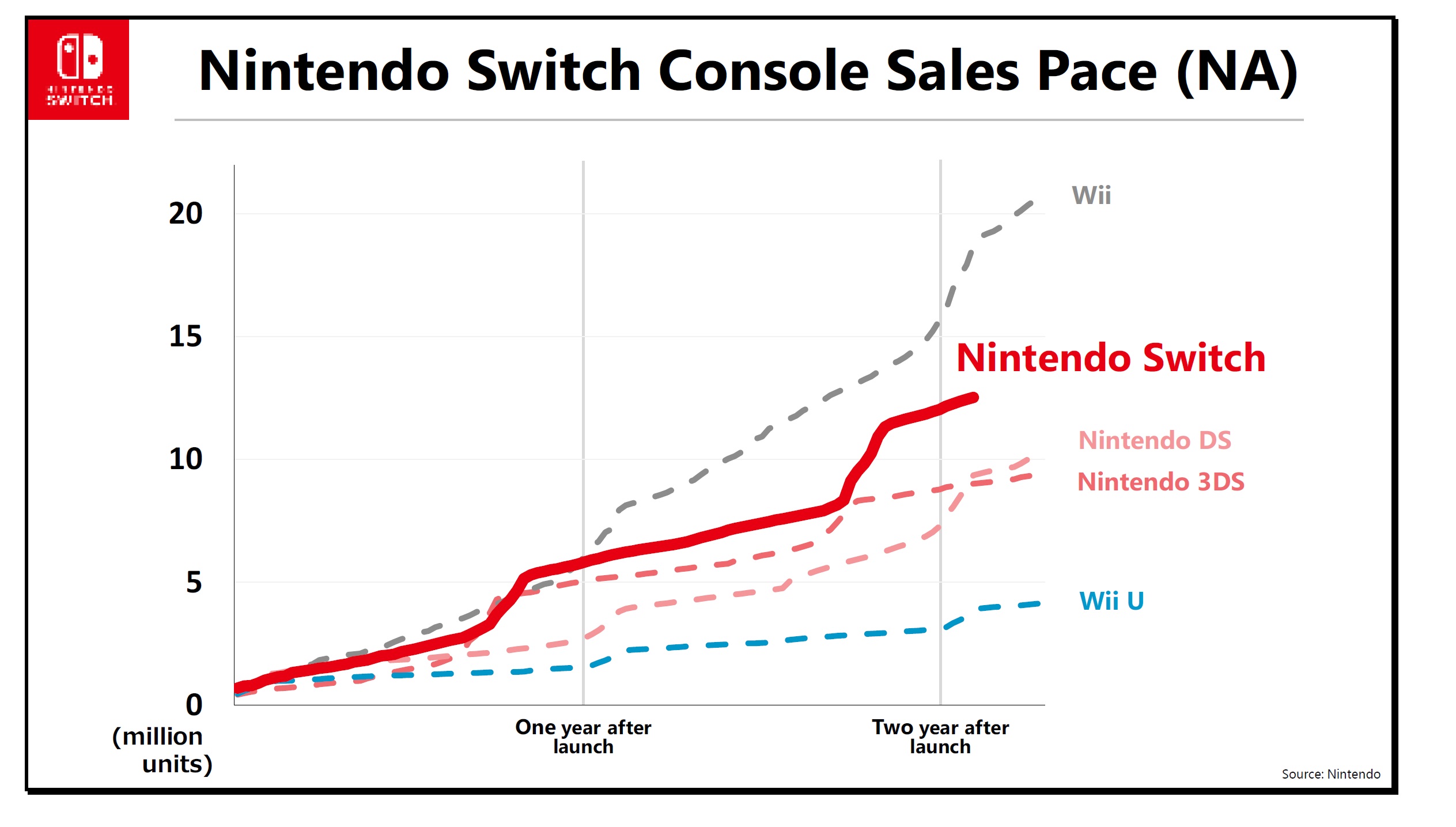 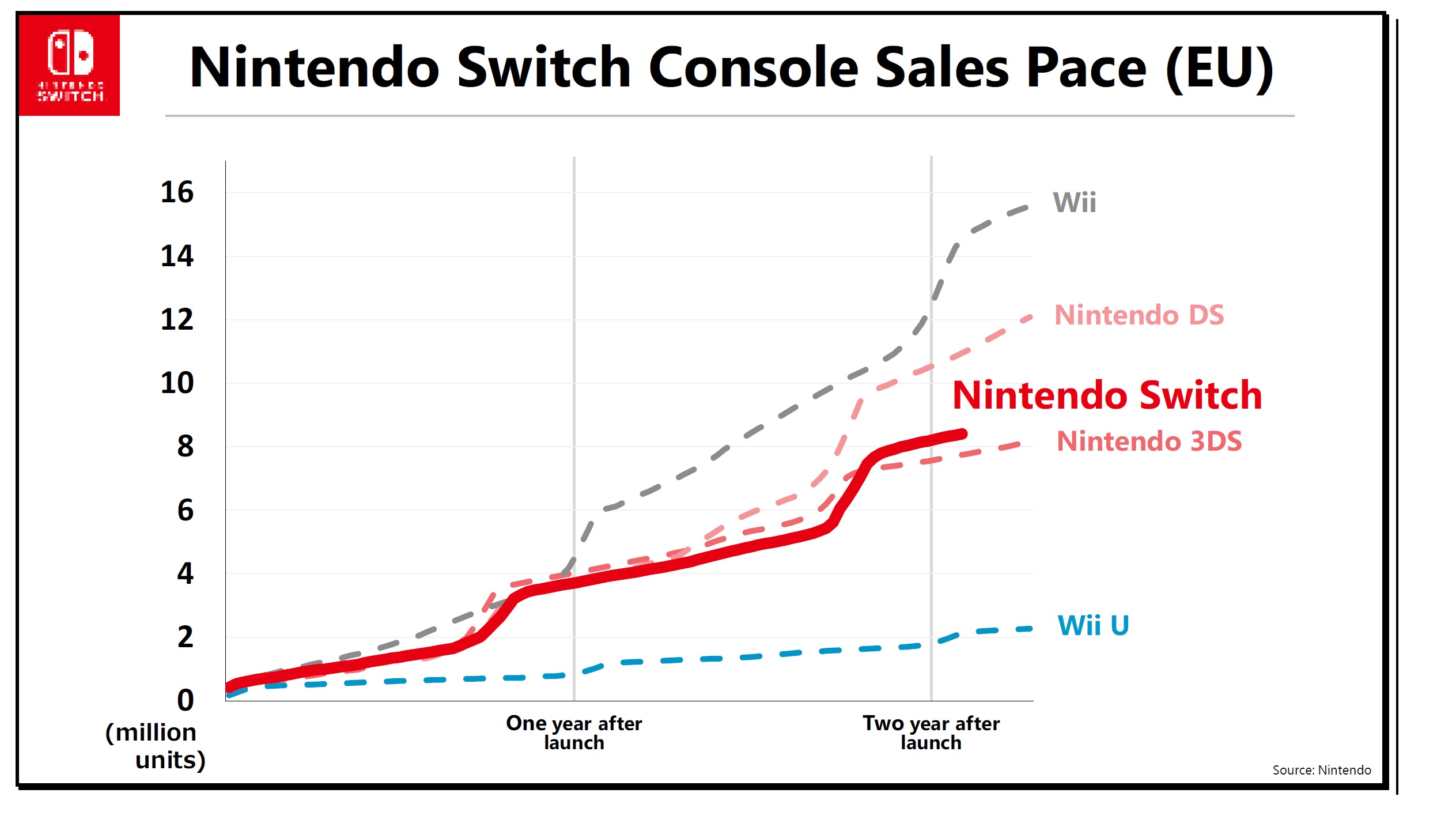 These are the figures for the European market. Since its second holiday season, Nintendo Switch has surpassed the pace set by Nintendo 3DS. 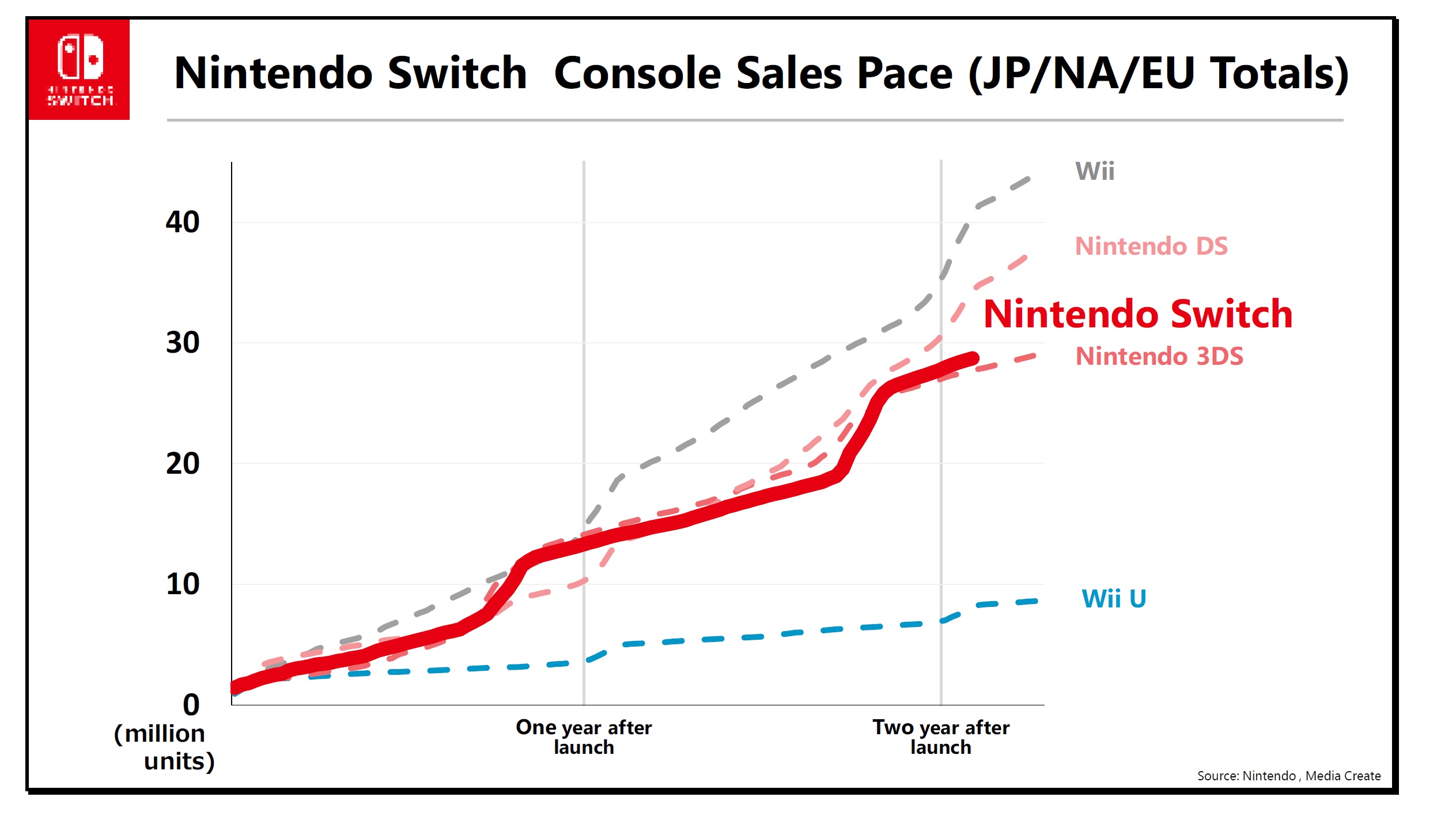 And the total numbers combined for the three regions I just explained look like this. Although there are variances from region to region, Nintendo Switch is spreading at a pace comparable to that of our previous hardware.