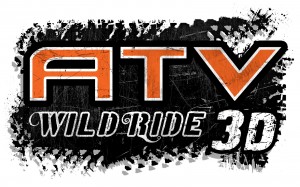 It’s like Wave Race, only on dirt. And with less color. And fewer dolphins.

The last time the gaming industry saw a truly decent entry in the “X-treme” sports genre was probably well before the launch of the last generation of consoles. Every once in a while a snowboarding game or a skating game will crop up, re-enthuse folks for a few months, and then disappear as quietly as it came (2007’s Skate, anyone?). There seems to be a perpetual cycle with such games that cannot be broken, and more often than not it’s due to the fact that they rely more on appealing to the “skater” aesthetic than having good platforming (such is what brought the Tony Hawk’s Pro Skater series so much acclaim) or solid racing mechanics (such as Wave Race 64).

So here comes Mutant Mudds and Dementium developer Renegade Kid, trodding up to our virtual eShop doorsteps with their own attempt to succeed within the confines of a genre that had its heyday in the early to mid-2000s. When you first see a screenshot or watch a trailer for ATV Wild Ride 3D, it looks and sounds– certainly to its detriment– like everything you’ve ever seen before. Fast paced alternative rock, lots of overly-enthused voice effects, plenty of dirt, and “massive air” are all staples of a game presenting itself in this somewhat-dated genre, but in the case of this Renegade Kid racer, bland first impressions have proven to be all but incorrect after spending some time with the game:

Wild Ride is, thankfully, neither bland nor dated. 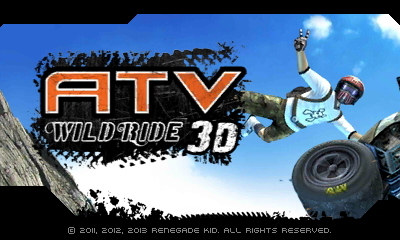 Races in ATV Wild Ride 3D are four player races. There’s none of the twelve-player chaos you’ve come to expect from the kart racers that are predominant on Nintendo consoles, and the line between Wild Ride and, say, Mario Kart 7 only gets more distinct as you play: Where Mario Kart is accessible and often driven by environmental factors (item box rolls more than anything), Renegade Kid’s latest is about as deliberate as they come. The vehicles have a very satisfying weight to them, and if you don’t know exactly how to move and when to do it, you’ll go careening off edges or into walls, which can seriously hurt your long term performance.

It’s not uncommon for racing games to have a “weight” to them, but what you find in Wild Ride isn’t quite the same as the weight in a game like Forza or Need for Speed. Those games tend to feel somewhat slippery, whereas this one– alas, I repeat myself– feels deliberate. The only comparison I can make to it would be the aforementioned Wave Race 64, which also has a really interesting and addicting weight that can be a little off putting if you prefer your racers to be fast and easy, where speed is the only factor in winning. And the similarities between Wave Race and Wild Ride don’t end there. 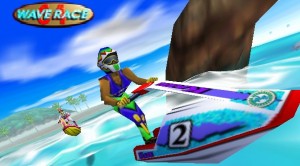 Chiefly in that they both have the initials “WR”

On a gameplay and control level they feel nearly identical in the most basic of ways. In both games, going off of a jump means you need to know exactly how much distance you have to cover before the approaching wall/drop-off, how your vehicle is going to behave when you land, what angle you’re going to land at, and which way you need to turn when you land. It can be extremely daunting when you first play (my first few races left me somewhat jaded towards the game), and I wouldn’t be surprised if more than one player decided the game “wasn’t any good” because they had trouble getting the hang of it. Actually– to make another extremely odd comparison– the game feels an awful lot like Capcom’s Monster Hunter.

Aside from leaning heavily on the tricks mechanic, Wild Ride really only differs from Wave Race in that it lacks the vibrancy and charm of the N64 classic. Wave Race was loved both for its stellar gameplay and for its incredible visuals, whereas Wild Ride leans more on the former and has almost none of the latter. Sure, the game doesn’t look bad by any means, but it doesn’t go deeper than face value. It is, for worse, as straightforward visually as something could be.

On top of that, there were two small technical things that stood out to me as being particularly frustrating: Firstly, the game has a sort of “ollie” mechanic that allows you to get extra height going off of jumps. This results in being able to fit more tricks in– netting you more “Turbos” (boosts)– before you land. In and of itself, this is an extremely important and satisfying mechanic, but if you’re approaching an especially long hill, the camera doesn’t pan upwards to allow you to see how close you are to the top. This means that there’s no way to know exactly when to “ollie”, and consequently you’re left guessing, with potentially hazardous consequences. 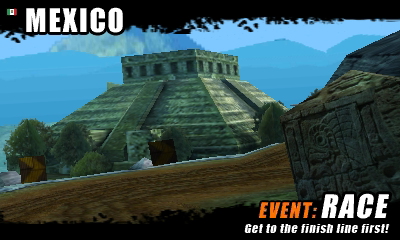 The other technical issue is the “trick camera” (which can be turned off, thankfully). There are three types of tricks in the game– short, medium, and long– and whenever you do a long trick, by default the camera turns to face the front of your ATV in a cinematic “showcase” of how cool the trick is. It’s a fine feature in its own right, but in a game that so strongly relies on you knowing exactly what’s coming up next in the race, it’s a massive disadvantage to have turned on. You’ll end up careening off edges and hitting walls occasionally due to it, but more often than not it just makes it nigh-impossible to know if you have enough airtime to pull off another trick and get another turbo, since you can’t see the ground.

After all, the game is built around the turbo mechanic. Whether or not you win the race depends completely on how well you know your vehicle (admittedly, there isn’t a whole lot of vehicle variation) and how well you know the course, because those things determine how many tricks you can pull off in any given jump. On top of that, doing the same trick twice on any given lap won’t get you a turbo at all, which adds another, occasionally frustrating (in a good way) element to how you play. With 24 tricks to choose from you’d think this wouldn’t be an issue, but in the heat of the race you end up instinctually pressing the button combinations you’re most comfortable with, which could be a huge waste of airtime.

It’s a game about skill, and whether that’s a good or a bad thing is up to you. 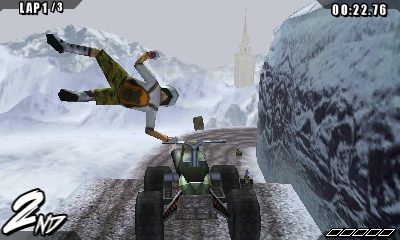 ATV Wild Ride 3D won’t take you too long to beat– I got gold (not perfect scores, just gold) on every Grand Prix in about 5 hours– but the ability to play online, locally (no download play though; both people need a copy of the game), and by yourself against bots adds quite a bit of replay value. There are 12 racers and 12 ATVs to unlock, but after the first 6 or so it’s purely for aesthetic value as they all have the same stats. Personally, I play as the Mutant Mudds ATV every time.

So far I haven’t had the chance to play online, but Jools assures me everything is holding up well in his playtests with other members of the blog-o-sphere. Assuming it’s as good as playing locally, it will be something I take advantage of as soon as I have the chance.

The bottom line…?
Can anything compete with Mario Kart on a Nintendo system? No, probably not. But if you’re longing for something more straightforward and nuanced than Mario Kart 7 or Sonic and SEGA, you can’t do much better than ATV Wild Ride 3D. It’s an extremely pleasant surprise from a game I had not expected would be much beyond generic given the coat of paint it wears, but alas, Renegade Kid has managed to squeeze out yet another eShop goodie. You just gotta wonder how much longer they can go without making a bad game.

… you’re in the market for a good racing game with significant gameplay depth and nuance, assuming you can forgive one or two small technical issues and generic-looking courses here and there.

… you prefer your racers to be fast-paced and straightforward, or you simply don’t like racing games.

This game is better than:

It’s better than every other off-road racing game I can think of from the last ten years, most of which are on PS2. But that doesn’t necessarily do the game justice since most of those games were sort of bad. Ah well.

Want to reach Austin for some reason?