I’m in a rather unique position as a reviewer of Goldeneye right now: I’ve never actually had the joy of experiencing the single player campaign of the original 1997 title, and I certainly never saw the 1995 movie that goes along with it. Because of that, I feel like I almost have a special perspective on this re-imagining of that classic N64 title that not many people get, but playing through this game has convinced me that perhaps I should go back and give the original game a shot, if only to understand where this sequel came from and what has changed since then.

Now, while I say that I have never played the single player of the first Goldeneye, don’t think I’ve never played the splitscreen. I think anyone who was between the ages of 10 and 50 in the 1990s played at least one game of Goldeneye with their friends, and I proudly tout the fact that I have played many more than that. I’ve probably killed my friends hundreds if not thousands of times in the original title, so naturally the first thing I did when I purchased this new title was throw a splitscreen party with as many friends as could make it. 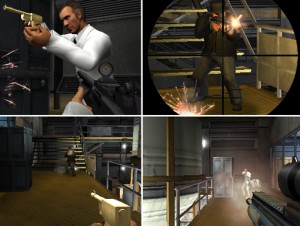 We got together, made some food- all the good stuff that goes with a great splitscreen party- and then we headed right into the game. I picked up my trusty Wiimote/Nunchuck combination to control my character, but it’s important to note that you can also use the Classic Controller, Classic Controller Pro, or the GameCube controller to control the game in single player or multiplayer. As we played hour after hour (I think for a total of about 6 hours straight), I became increasingly aware of how many flaws there are in the splitscreen portion of the game, which is a real shame considering it should be the most important aspect of a game like Goldeneye.

The first flaw I caught was that there is no Capture the Flag game mode, which upset me considering it’s my favorite game mode in shooters. Even weirder is that there is a CTF variant in the online portion of the game (called “Black Box”), but it (along with some other game modes) are only available in the online play. There are only 4 available modes for splitscreen: Conflict, Team Conflict, Golden Gun (Yup, it’s back!) and You Only Live Twice. Secondly, many of the options that made the first Goldeneye’s (along with every Bond game since, and many other shooters) split screen so fantastic are completely removed, including the ability to modify health, and play with weapons scattered across the map rather than playing with classes. These two things really made me a bit frustrated, since the one thing I was looking forward to about Goldeneye is that it wouldn’t be like other modern day shooters (which I am not a huge fan of) and bring me a huge list of variables to play with in order to make my game experience more enjoyable.

One more thing I want to point out that had me rather frustrated was the brightness of the maps, and arguably the whole game. While 99% of the time there was no trouble at all, I found myself being completely unable to see anything upwards of 10% of the time on some maps due to how dark the game can be at time. Of course, we learned to avoid dark areas, and it provides some remarkably interesting gameplay for players who choose to dress in all black, but often times it was just obnoxious. I fiddled with the options, and turned the brightness all the way up, yet still couldn’t see the “logo” on the options screen that it told me to look for. This is something I’d love for Eurocom to try and address, or at least tell people how to perhaps fix the issue with their TV. 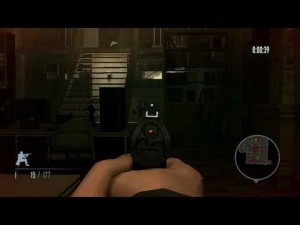 You know what happens if you go back there? You can’t SEE ANYTHING.

Fortunately, the issues I have with splitscreen end there, and everything else about it is a fantastic, hectic, all around awesome gameplay experience. As I said before, we played for about 6 hours straight, so that in itself is a massive testament to how enjoyable the split screen actually is. There are a total of about 8 maps, and some are returning maps from the original, though they’ve been completely redesigned for this new installment. While the returning maps (Facility, Archives, etc) don’t have the same little quirks about them that the first set of maps had, Eurocom (the developers) have done an utterly fantastic job at giving each map a whole new set of quirks that will surely make for some awesome memories between you and your friends.

Additionally, while many of the cool modifiers have been removed that have been in past Bond games, there are still quite a few ones to play around with, including the return of Paintball mode, Move Your Feet (if you stand still, you explode), melee only, and around 10 others that give you a lot of crazy ways to play. Personally, we only ever played Conflict and Team Conflict, and those two modes alone had us playing until the wee hours of the morning.