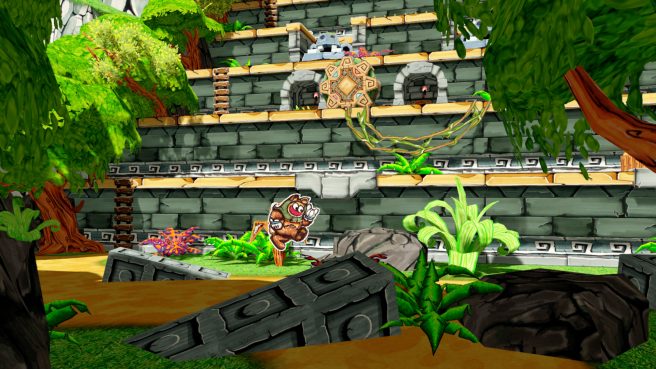 Zockrates Laboratories today revealed that Ruffy and the Riverside, its open world action adventure game, is on the way to Switch. A release is planned for 2021.

Here’s some information about Ruffy and the Riverside:

Ruffy and the Riverside

Join Ruffy and his buddy Snokko in this open world action adventure and safe the Riverside Kingdom!
The Riverside Kingdom is home of Ruffy and his buddies. It´s a magic place of fantasy and peace – but things changed when a strange object appeared near the castle. All over the countryside cubes appear and promise endless entertainment, but whoever entered them never returned.

No go and do something about it! Explore the world, enter dungeons, solve quests and riddles and build your team to strike back! Use your strength, use your imagination and above all: Use your awesome talent – The Swapping!

First of all: Yes, Ruffy can do what every hero is supposed to do, he can run, jump, climb and fight. He can drive vehicles, plays basketball and he throws his bee like a mayor league fastball. He is a powerhouse, and yes, of course: he can talk too.

But folks, the best is yet to come: Ruffy swapps materials!

Swapping? Well, it`s basically copy&paste! Want to cross a river? Just copy that ice nearby and paste it on the river – Whoops! – it turns to ice and you walk over. Easy. Want to get on top of that waterfall? Maybe there is a tendril nearby? Ruffy can change it all! The sun can be a moon, day turns into night. A rock can be a truck – lets go for a drive. Use your imagination and give it all a try. You` will make your way!

Swapping feels magic, it`s easy and it looks supercool. It makes the world the way only you can see it!

Riverside is an open world ready to be explored. Unlock new areas, master Dungeons, solve quests, talk to townspeople, drive vehicles, jump, run, crash and climb – what ever it takes. Most of all: This world can change and it`s you who does the trick. Just swap it baby!

It`s all handpainted. Yes really – on paper. Not those photoshop or ipad drawings. This is real, pen on paper and then put into the game. Wow – you can feel it: we are BIT proud of that. It´s just unique. Take a look.
What else? Well not much. Except when you change the whole world – those graphics are all handpainted too 😉

Every child knows it`s dangerous to go alone. So you just shouldn´t, right? But HEY LISTEN, here it comes: You got some company. It`s only a bee, but it`s yours and you can throw it. Smash away enemies, crash boxes and more. Swapping? Yes – use your bee for swapping too. Very handy when that lava is just too hot to pick it up yourself (or if you are just too lazy to walk there).Then there is your homie Snokko. He´s a hell of a buddy and always helps you out. There is advice and training, but there is also basketball and Snokko is pro on the court. Sounds pretty helpful when facing an invasion, right?

What more? Well, explore the world and see. You`ll meet those animals, creatures and ghosts on your way. No spoilers here.

Build your army, build your base!

Stopping an invasion never was a job for just a bear and a bee, so you need an army. SPOILER: You wont get one. But you can build up your Bear Force. Rescue bears, recruit them, equip them and see how much support they can give. Never give up and just bring it all to your base camp.

Why walk when you can drive? Simply hop in and off you go. Some might look ancient, some from the future, some fly some, some swim, some drive. Go out find them and don´t forget to drop them in your base camp. Those lazy bears want some vehicles too!

We’ve included a trailer for Ruffy and the Riverside below.