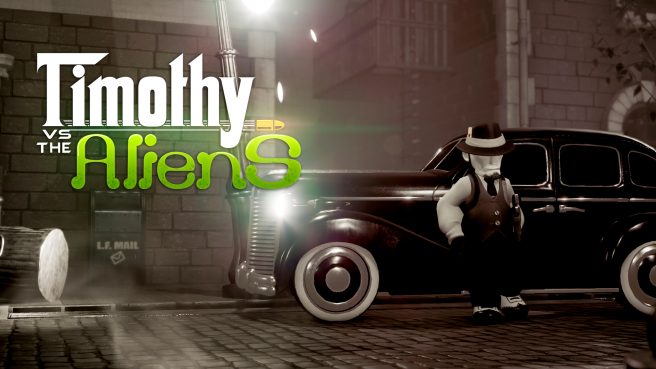 WildSphere has announced that its open-world action platformer Timothy vs. The Aliens is launching on the Switch eShop on July 22. Check out an overview and trailer below.

Timothy vs the Aliens is an open-world action platformer where a tough and proud gangster named Timothy will lead the resistance against an invasion of terrifying aliens that have come to devour everything they will find on their way.

The game is set in a black and white world that contrasts with the colourful aliens, and combines platforms, exploration, puzzles and a lot of action. In a large city full of characters, stories and missions, Timothy will fight against tricky enemies, drive classic cars he will find on his way, use powerful weapons, buy items and ammo from the gunrunner, and help other characters in secondary missions. Timothy will also be helped by other visitors who will grant him upgrades, as well as having an ace up his sleeve: a special power to slow down time. Timothy’s world will take the player to the classic gangster movies with a touch of black humour and eccentricity.

More: Timothy vs. The Aliens, WildSphere