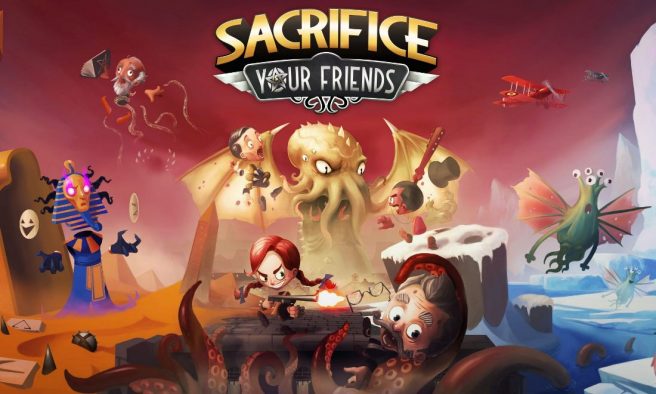 The party brawler Sacrifice Your Friends is planned for Switch, RedDeerGames and Astrolabe Interactive have announced. It will release later this year.

Sacrifice Your Friends is a 1- 4 players party brawler inspired by the works of H.P. Lovecraft. The game was successfully funded on Kickstarter and chosen as a finalist in the Ubisoft Indie Series competition.

READY FOR SHEER MADNESS?
There is nothing sweeter than a chibi Cthulhu. But don’t be fooled by the cartoon style, Sacrifice Your Friends is a true challenge.

The game is fast and dynamic, and the battles are intense. Randomly appearing weapons and various traps make you think on your feet and never stay in one place too long.

Of course, unless you want to be sacrificed.

FOR LOVECRAFT FANS
The Mountain of Madness or the Nameless City catacombs are places that every Lovecraft fan will definitely recognize. Story mode will take you and your friends to locations inspired by the writer’s novels.

Would you prefer to explore the universe of H.P. Lovecraft by yourself? No problem. The brave one can go on a dangerous journey all alone in a single-player mode.

WHO SAID THAT HORROR CAN’T BE FUNNY?
Sacrifice Your Friends will appeal to everyone who likes good horror… with humor. Chasing friends with an enormous axe in their hands, killer tentacles, or the odd fish-folks mob of Innsmouth – it sounds like an epic party!

AVAILABLE ON MANY PLATFORMS
Sacrifice Your Friends is already up on Steam Early Acces and will be available for Xbox One and Switch later this year. The title supports cross-platform gameplay so that you can play with your friends online over different gaming systems.

LOCAL & ONLINE MODE
Whether you share a couch with your victim or live on two opposite edges of the world, the Great Old Ones know no borders. The game includes local and online mode!

Don’t forget to wake mighty Cthulhu up later this year with Sacrifice Your Friends!

– Lovecraftian. Discover the mythos of legendary author H.P. Lovevcraft.
– Arena mode. Have at it with your friends in exciting arenas for 2 to 4 players.
– Sheer madness. Embrace madness and unleash devastating powers by transforming into the mighty avatar of a Great Old One.
– Locations. 16 unique dangerous arenas inspired by Lovecraft’s work.
– Fun for everyone. With simple controls and goals, everyone can join in. We know: we had our mothers test it out.

Sacrifice Your Friends will be sold digitally for Switch via the eShop.