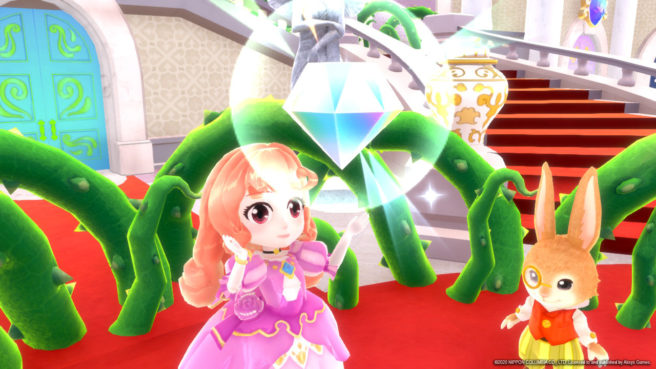 Here’s an overview of Pretty Princess Party, along with a trailer:

Become a princess of a magical castle!

Pretty Princess Party on the Nintendo Switch transports you to a magical land to explore a long-abandoned enchanted castle. Learn to be a princess and decorate the castle any way you wish. Begin by creating a princess character with endless choices of dresses, shoes, accessories, and hairstyles. Then train to be a princess by playing six different fun mini-games, including cake decorating, horse racing, and dancing. Restore the castle to its former glory and win the prize!

Successfully completing the games will unlock new outfit choices and allow you to access hundreds of unique items to decorate your castle’s 20 rooms—over 1,300 items total! Once the rooms are decorated, you can take commemorative photos to show off your royal style! Even after completing the entire magical story, you can take on new challenge objectives to update rooms and photographs.

Create your own princess character with over 50 choices in gowns, shoes, tiaras, and hair ornaments, plus 25 hairstyles and many eye color and makeup options.
Play fun mini-games with one-to-four players to polish your posh: Dancing, horseracing, cake decorating, archery and more.
Decorate 20 rooms in your castle how you wish with over 1,300 lovely items: furniture, paintings, wallpaper, and much more.
Take and update photos within your newly-decorated rooms.

Pretty Princess Party is due out in December.