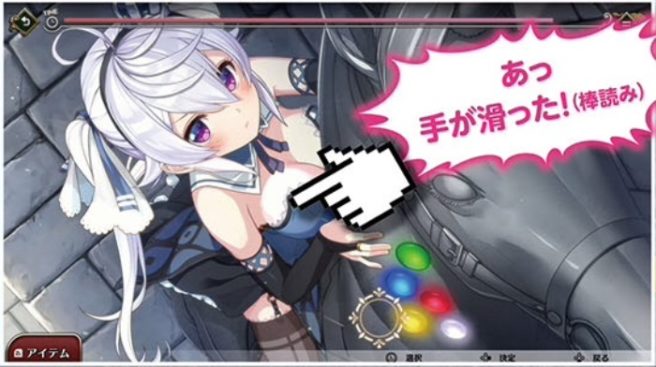 The latest issue of Famitsu has revealed Prison Princess, a “new sensation escape adventure game with beautiful girls, puzzle solving, and a bit of eroticism”. NekoMiko developer Qureate is working on the game as an eShop release.

– 92% complete
– Produced by Yuujirou Usuda
– Character designs by Ai Akasa and Inui Waon
– In addition to the player, who plays the role of the hero, the game features two princesses
– Arisa: – Princess of the Aria Lara Kingdom
– Since she led a sheltered life growing up, she has seen little in the ways of the world
– Mild-mannered, but she has a passionate desire for world peace
– Spontaneous, intelligent, and well-versed in magic
– Sometimes surprises those around her with her sound and to-the-point statements
– Zena: Princess of the Zanji Tzard Kingdom
– Typical tsundere with a big ego and inability to be straight with people
– Since she is fears no one and never holds back, she tends to be abusive towards and quip at the hero. Her ability with a sword is first-class
– Prison Princess is set in the Meigard continent, where there was a long run of peace and prosperity until the Demon King suddenly appeared
– As town after town was invaded, a descendant of the ancient hero stood up to oppose the Demon King, but was killed during his journey
– While now only a spirit, the hero made his way to rescue the captive princesses
– As the hero has no physical body, he cannot explore on his own
– Guide the princesses through the castle to solve its puzzles
– Investigate suspicious locations to obtain items and escape hints
– Using those hints, players can solve various puzzles to guide the princesses to their escape
– Many, life-endangering challenges will block the princess’ path
– Some puzzles have time limits
– While touching is described as “strictly prohibited,” touching the princesses will trigger various reactions
– The developer suggests not worrying too much about the princess’ frequent display of cleavage and underskirt, as the player’s actions in this case may effect the outcome of the princesses and hero