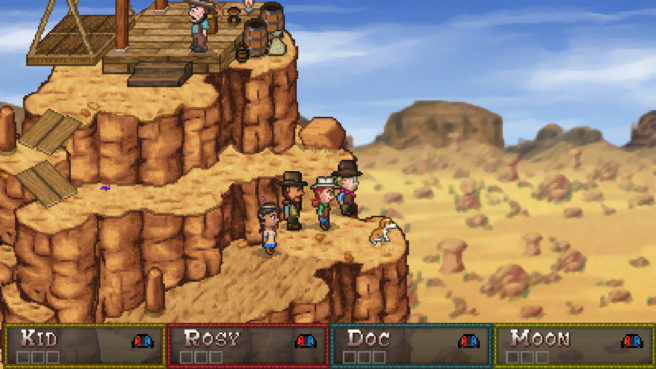 According to an eShop listing, Experimental Gamer Studios is bringing the retro RPG Boot Hill Bounties to Switch. It will launch on Switch in April – specifically April 14.

Here’s an overview of Boot Hill Bounties, along with a trailer:

Boot Hill Bounties is the second game in a series that sees Kid and his companions journey deeper into the darkest corners of the Wild West and come face to face with the evil Creed Little, Stampede Sally, Tuco Delgado, Scorpion Saint and Burning Crow. An epic Wild West adventure packed with excitement, intrigue, terror and the occasional dose of humor.

-4 Player Co-op: Play single player or up to four player local co-op. Friends can seamlessly drop-in and take control of one or more of the four characters!

-No Random Battles: Enemies can be seen and avoided, and previously defeated enemies move out of your way. Fight outlaws and animals! Can you stop a barroom brawl? Can you defeat a gang of raccoons hoarding precious garbage?

-Active Combat: Typical turn-based combat is replaced with a fast and engaging real-time system where all players must follow the battle at all times and adapt to new strategies!

-Much to Do: Get to know the over 350 unique inhabitants of Bronco County and discover unique side quests in the local newspaper. Grow crops, cook meals, customize your weapons with status ailments, learn medical treatments, solve riddles, compete in the ‘Chuckwagon Chief’ cooking competition and much more!

Pricing for Boot Hill Bounties is set at $14.99 on the Switch eShop.