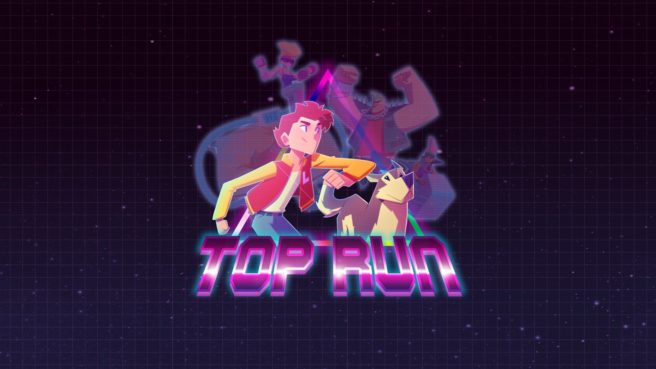 Publisher Fantastico Studio and developer Katata Games today announced Top Run for Switch. The retro-stylish runner, which has platforming and shooting elements, is due out in early February.

Here’s an overview of Top Run:

Top Run is an endless runner. Also a platformer. Also a shooter. It’s a unique take on endless runners in the style of 80’s. Play as Kevin and his dog Buddy and make your way through the neon city full of dangerous enemies. The game has a unique old school style with neon, pixel art, a bit of outrun, tiny piece of synthwave, scanlines, VHS effects. What else anyone would want in a retro arcade game? Also If you love 1980s then you definitely love good music. Top Run has an amazing soundtrack from a great synthwave artist – Beckett.

– Run as far as you can and get the best score

– Use superpowers to survive epic battles while you run!

– Collect pixels to upgrade your abilities and gain more power!

– Level up and customize your 80’s room

– Tons of explosions and fun

– Normal mode: fun, challenging and addictive but not the hardest game ever

– Hardcore mode: run, survive, test your reflexes (the way arcade is supposed to be played)

– Rage mode: what others call zen we call rage, let your inner anger out!