Posted on March 25, 2013 by Austin(@NE_Austin) in Features, Podcast Stories, Reviews, Wii U eShop 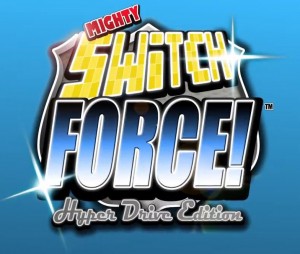 Amidst a drought of decent Wii U games, WayForward’s top-notch HD platformer might just be the thing you’re looking for to kill time until the next big release.

Originally released in late 2011 on the 3DS by Valencia, California-based WayForward Technologies, Mighty Switch Force! came out to largely universal acclaim, but seemingly got lost in the shuffle alongside the release of other great retro-styled downloadables for the system, such as Mutant Mudds and VVVVVV. Wanting to further test the waters, WayForward announced this past July an HD port of the game to coincide with the launching of the Wii U, featuring more levels and updated visual stylings. Despite the glut of self-referential style direct-download platformers abound in this day and age, Mighty Switch Force! Hyper Drive Edition manages to stand out from the rest with its natural, effortless, tacit streamlinity in gameplay, additional content exclusive to Wii U, and grade-A soundtrack. 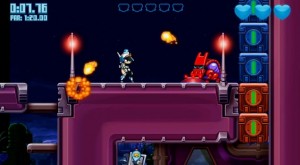 Players play (and ballers ball) as Patricia Wagon, a crime-fighting heroine in search of five scantily-clad criminals on the loose in a world filled with walking purple bombs and scary green bats; the game’s premise is, of course, inane and a non-sequitur, but WayForward thankfully didn’t play it up like many do and let it fall into the background, letting the game breathe. Armed with a laser gun and a knack for jumping great heights, we quickly find in the first level that the platformer’s gameplay gimmick will be flipping— pressing ZR (or A, as Austin questionably does) will bring a corresponding brick in the background to the foreground, simultaneously sending all presently-foreground bricks to the background. It’s a mechanic both simple and smooth in execution and allowing for immense depth in level design.

While Mighty Switch Force! doesn’t include any time limits in its levels, temporal mastery is still a primary focus. Challenging par times are given for each course, and though the game can be played and completed whilst completely ignoring them, they turned out to be the main reason why I became as infatuated with the game as I did. In an incredibly concise and organic way, WayForward manipulated the way the game was played by forcing one to operate as efficiently as possible, suggesting play imitating that of a speed runner (speed-ronner). Though not a codified gameplay mechanic, trying to meet those dang par times managed to fully pique my focus and attention, creating that memorability-through-repetition phenomenon that oh-so-many platformers never manage to do; I’m still able to look back upon most levels with fond memories, something I can’t really say for contemporaries such as New Super Mario Bros. U. Mighty Switch Force! is meritorious enough when not playing through it with the mindset of a speed-roner, but would have only been another notch in a belt encapsulating a growing belly of modern 2D platformers on Nintendo consoles, as opposed to the attention-grabbing chrome ‘50 Cent’ belt buckle itself. 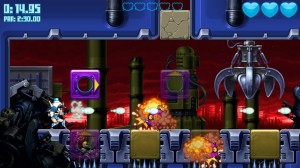 WayForward kept the experience fresh by introducing level diversity in an excellent manner, changing the design level by level from straight platformer to Donkey Kong Country barrel level-esque exploration to speed puzzle platformer highlighted by blue and red “locking” bricks with ease. All the while, the monolithic gameplay mechanic of flipping still felt the same, yet catered to each style of level in an ever-so-slightly different way— in the DKC-based levels for example, timing was a bigger factor, whereas memorization of proper flipping took precedence in the puzzle-platformer heavy levels. To top it all off, the final and sixteenth level abruptly changes the main gameplay mechanic completely, and in tandem with some finale-worthy, nail-bitingly tight platforming and puzzle-platforming sequences, combined to create what I consider an iconic level in platform gaming.

Aesthetically, I found The Mighty Switch Force! Hyper Drive Edition to be very charming, possessing cutesy Japanese-esque flair and some subtly beautiful, hand-drawn art commissioned specifically for its high-definition port on Wii U, a definite upgrade over its more pixelated 3DS iteration. I loved the anime-girl panache found throughout– great examples being the high-pitched exclamations Patricia makes to start each level (“Stop, in the name of the law!”) and the bumper screenshots after completing each level showing the suggestively-clothed fugitives-turned-captives in various precarious predicament– and I loved that the backgrounds were all beautiful, but not beautiful to draw enough attention away from both the fastidious gameplay and glorious background music. 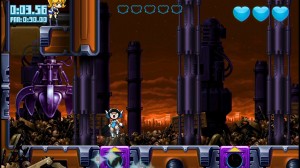 The soundtrack– written by a guy I’ve never heard of, Jake Kaufman– is truly phenomenal, and is more than worthy enough to dedicate an entire paragraph to. Capturing the supreme groove of the Genesis Sonic the Hedgehog series and combining it with the well-composed melodies and musicality of the NES Mega Man series, all the while adding in modern electronic music motifs, Kaufman managed to compose a modern classic that’s not only a great listen alone, but provided a wonderful backing voice that helped along the streamlined feel of the gameplay immensely. I strongly look forward to any work Mr. Kaufman puts out in the future due to this got dang gem of a soundtrack.

Iffin’ you only wished to simply complete the main sixteen levels of Mighty Switch Force!, the game should only last around two to three hours for ya; were you to try to procure all par times, beat and par all five bonus levels that come packaged in from the free DLC on 3DS, and then beat and par all twenty-one Hyper levels– harder remasterings of all levels, exclusive to Hyper Drive Edition— I’d easily double, triple, and quintuple that time, respectively. Though Mighty Switch Force! had been slightly criticized initially for being short upon its initial release in 2011 on 3DS (something I don’t necessarily agree with when talking about the original sixteen levels; much like how punk rock albums are short for a reason, I found the somewhat “short” length felt right, drawing parallels with the efficient and streamlined nature of gameplay), with all of the dang additional content right at your fingertips, I don’t see how Hyper Drive Edition could fall under those same criticisms.

The bottom line…?
All in all, while Mighty Switch Force! probably won’t leave the indelible impression many classic platformers leave due to its smaller scope, I don’t know of a more polished and concise platformer currently existing on an eighth generation Nintendo console. With its increased length and jaggin’ soundtrack, Hyper Drive Edition, along with Mutant Mudds, Runner2, and VVVVVV, quietly stands tall as another pillar in what could easily be referred to as ‘The Harlem Platformer Renaissance”, or, “The True Golden Harlem Age of Platformers”.

… time limits pressure you too much, and if you really crave exploration and immersive world-based gaming