A sizable step in the right direction.

I think, at this point, it’s very difficult to judge a Resident Evil title without comparing it to past entries in the series. It’s almost like Sonic in that respect, constantly trying to reinvent itself with a blend of what people used to like about the franchise and a more modern, trendy aesthetic. With Resident Evil: Revelations on 3DS (2011), Capcom appeared to be making strides towards meshing their two play-styles (survival horror and action-horror) together, and after the critical and commercial success of the game they decided to re-release it in high-definition for Wii U, Playstation 3, and Xbox 360.

And honestly, I’m very happy about that. 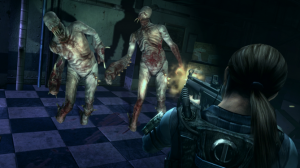 For those unaware, Revelations primarily follows the story of series-veteran Jill Valentine as she scours an abandoned (and rapidly deteriorating) luxury cruise liner for clues about the disappearance of her former partner, Chris Redfield. The story initially manages to be a somewhat confusing, overly complicated, but ultimately inconsequential element of the game that simply serves as the context in which Jill gets to explore this frightening maritime location, but as the game progresses, things begin to unravel themselves, twists genuinely take you by surprise, and numerous (dare I say it) revelations are presented to the player in a way that almost makes you take the positively absurd Resident Evil universe semi-seriously. Almost.

Unfortunately the whole premise struggles to hold itself up under the weight of a few lofty logical compromises that players are asked to make in order to propel the narrative forward. It’s not a constant problem, but there are structural weak points in the tale during which the flaws of over-complication become all too apparent. In the end it doesn’t ruin the experience outright, but those with an affinity for water-tight plot construction best look away. 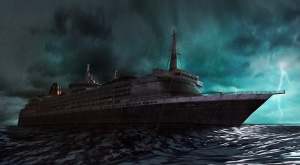 Now, whoever chose the geographical setting of Revelations probably deserves some sort of a promotion. The luxury cruise liner (called the “Queen Zenobia”) that you spend most of the game wandering about is arguably the greatest location that this series (known for its iconic locations) has ever been set within. This is in part due to the fact that massive, deteriorating, abandoned boats are inherently frightening, but also because the designers managed to put so much care into the atmosphere of each individual location within the boat that simply walking through them while back-tracking can be a frightening, wondrous, and memorable experience in and of itself.

Another big part of the scares (and there are plenty of scares, both the jumpy kind and the tense kind) comes from the monster design. While occasionally the game glosses over them in shooter-gallery-esque linear action sequences, by and large the general creature aesthetic in Revelations is also fantastic. Animations are downright gross in the best of ways, and their visual appearance is exactly the sort of thing you do not want to look at. Which, again, is great.

That isn’t to say that the entire experience is without atmospheric hiccups though. Particularly towards the latter half of the game you end up being rushed through some locations instead of getting to slowly (and horrifyingly) explore them at your own pace. The action elements tend to take over in these instances, as ammo is strewn about liberally and monsters are around every corner, which hinders the building of tension from room to room. I can’t say this was inherently a bad decision (it worked well in terms of pacing), but because the game pushes you forward more briskly you end up sort of unconsciously shooting your way through, rather than enjoying each room for what it’s worth. 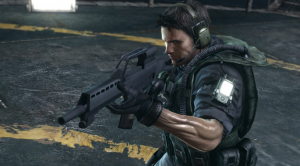 On top of these mildly frustrating action sequences is the fact that every character in Resident Evil: Revelations appears to be built from the disappointing modern-action-movie-character archetype. Jill Valentine wears a skin-tight leather suit with the front zipped down just enough to see her cleavage, Chris Redfield has massive muscles and about as much army gear as you could fit on his character model, side-characters spew useless jokes that ruin the atmosphere, and one of them even managed to say the phrase “that would be tits!” in an exclamation of how “cool” something would be. It’s an unfortunate turn for an otherwise masterfully designed game.

And such things are completely unnecessary, which is the most frustrating part. As good as I believe this game is, it could have been made noticeably better had the developers simply removed certain aspects outright. “Sidekick” characters are useless in gameplay 100% of the time, and only feel emotionally useful about 25% of the time, “hip” jokes didn’t need to be there, several of the side-missions could have been removed, a few useless action sequences should have been cut, and at least one of the bosses could have been shortened if not removed. It’s an over-developed game with at least an hour of padding in the eight hour play-time. 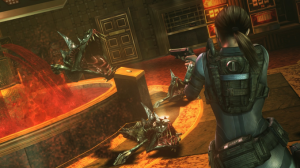 After the main campaign, you also have the option to play “Raid Mode”. Fans of the 3DS original will already be familiar, but for the rest of us: “Raid Mode” is basically a score attack sub-game where you pick a map (all are locations from the main game I believe), go kill monsters, and collect points. You can use the points to buy weapons or upgrades, and then use those weapons and upgrades to do better within ‘Raid’,

The mode also (thankfully) has online, but due to the fact that the game has yet to release, I’ve been unable to try it out with a friend. I look forward to doing so, though.