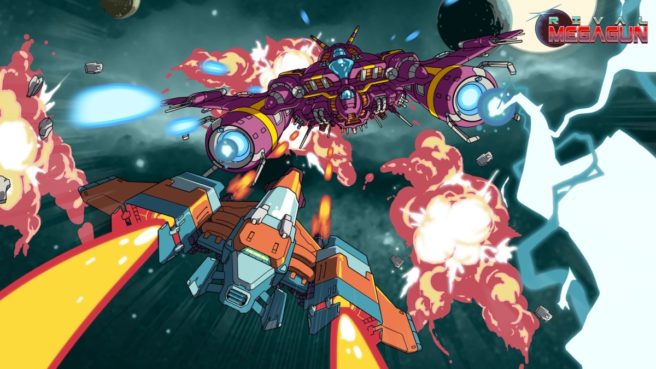 Rival Megagun is in development for Switch, publisher Degica announced today. A release is planned for late 2018.

A competitive shoot ’em up, Rival Megagun lets you transform into a huge boss ship and invade your opponent’s screen. Along with a single-player arcade mode, local and online versus battles are supported.

Here’s a trailer and overview for Rival Megagun:

Transform into your Mega Gunship boss form to blast your rival head-on in this unique shooting game with a competitive twist.

Rival Megagun is a competitive split-screen vertical shmup (or shoot ’em up, shooting game, STG) where you transform into a gigantic boss ship – your “Mega Gunship” – to invade your opponent’s screen. Build up your chain and unleash devastating attacks.

Multiple heroes to choose from, each with their own set of special weapons and Mega Gunship form. Features intense 2-player local and online versus battles and a single-player arcade mode.