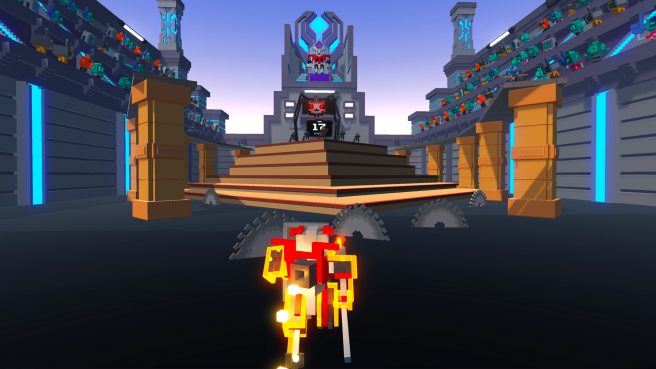 After earning a great deal of praise in Steam Early Access, Clone Drone in the Danger Zone is heading to Switch. Doborog announced today that the robot voxel slice-em-up will be released on Switch in 2021.

We have the following overview and trailer for Clone Drone in the Danger Zone:

Clone Drone in the Danger Zone is a robot voxel slice-em-up where any part of your body can be sliced off, which plays out across a variety of singleplayer, online multiplayer and online co-op modes. With your human mind downloaded into a robot gladiator, you must survive the sinister trials of the arena and join the human resistance against the evil robot empire.

Unique Slice-and-Dice Gameplay: Perfectly time every attack in intense physics-based combat where any part of the body can be precisely sliced off, and each hit can mean death

Surprising Weapons: Equip your robot to fit your playstyle with weapons like flame swords and giant hammers to equipment like jet packs, piston-powered superkicks and flame-throwing dinosaurs

Single-player adventure: Dive into an epic tale of human defiance against robot overlords in story mode or tackle endless and challenge modes

Online-Coop: Use the power of human friendship (and laser swords!) to survive in the arena

Online Versus mode: Battle friends in “Last Bot Standing” – A Battle-Royale-like game mode with up to 15 players, or fight in 1v1 duels

Level Editor: Make custom levels and challenges and share them with other humans! Explore the rich Workshop library of nearly 30,000 awesome human-built levels (exclusive to Steam)

Entertaining Commentary: With over 38,000(!!!) spoken words, Commentatron and Analysis-Bot provide a running commentary of your performance and react to your activities.

Clone Drone in the Danger Zone will be sold digitally for Switch via the eShop at launch.