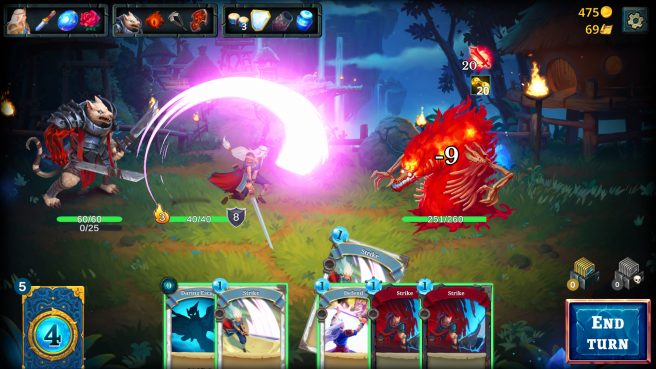 Nacon and Abrakam Entertainment have announced that Roguebook, a roguelike deck-builder, will be released on Switch. The console versions will follow sometime after the initial PC debut in June.

Here’s an overview of Roguebook:

The ancients speak of a Book written since time immemorial containing all the world’s legends. After many fabulous adventures, recounted in Faeria – Chronicles of Gagana, this relic was lost in a well of Faeria. Through contact with this source of magic, the Book developed a wicked free will of its own and became the Roguebook!

You are trapped in the Book of Lore of Faeria, and each page represents a new challenge. Lead your two heroes to victory in this roguelike deckbuilder developed in partnership with Richard Garfield, creator of Magic: The Gathering™. Put together the best synergies between cards, relics and abilities, and take on the Roguebook.

LEGENDARY HEROES
6 hero pairs – Choose 2 heroes to start a game. Each hero has a collection of over 50 cards, a personal relic and a unique skill tree.
Maximise synergies – The hero at the front protects the hero at the back. Switch the positions of your heroes and combine their strengths to unleash powerful combos.
Strategic battles – Skilfully anticipate and queue up your actions to defeat over 40 bosses and enemies.

BUILD YOUR DECK AS YOU PLAY
Dynamic deckbuilding – Over 200 cards to cleverly assemble as the game progresses. You will never play with the same deck twice.
Relics with unique powers – Upgrade your cards with 30 special gems. Collect 80 relics with extraordinary effects.
More cards, more power! – Each hero has a unique skill tree to unlock. Collect cards and select the best skills!

EXPLORE A WORLD THAT CHANGES WITH EACH NEW BRUSHSTROKE
The Book changes each time you open it – The map along with its mysteries and dangers are procedurally generated for a brand-new challenge every time.
Paint the world – The Roguebook’s pages are composed of hexagonal tiles. Use magic inks that reveal different patterns to fully explore each page.
A range of encounters – Merchants, travellers, ruins, quests, etc. Lots of chances to obtain cards and relics… or to fall into a trap!

EACH RUN COUNTS IN THE QUEST TO DEFEAT THE ROGUEBOOK
Hours and hours of fun – 20 hours on average to beat the game, hundreds of hours to unlock everything.
Progress at your own pace – Collect pages and use them to buy upgrades. Level up your heroes to unlock new cards.
20 difficulty levels – Defeat the final boss to unlock the Epilogue level. Each level grants access to new relics, gems and encounters, but also spawns tougher enemies.