Save Your Nuts heading to Switch 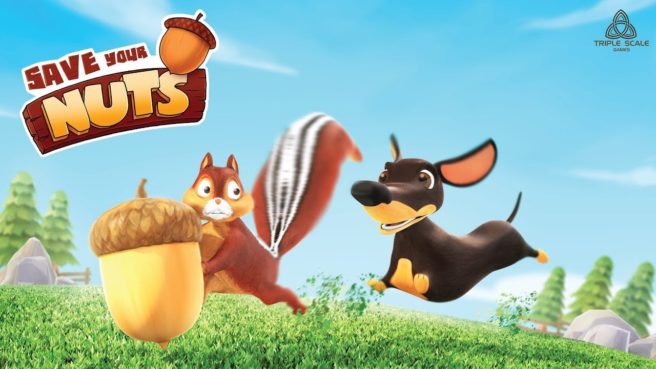 Triple Scale Games has announced that it will be bringing Save Your Nuts to Switch. The multiplayer game, which features physics-based battles, is currently without a release date.

In Save Your Nuts, crafty squirrels organize a tournament to challenge other animals in a physics-based competition for the ages. Make daring plays alongside your teammates, grab food power-ups, and tackle your opponents to steal their nuts in this wild multiplayer-focused party game!

Couch Party up to 8 Players or bots
Buddy up with your friends in Couch Party mode, which supports 1-8 players and challenging AI-controlled opponents. Invent new strategies on the fly – and enlist your friends to unleash creative combos!

Online Multiplayer
Test your nut-saving mettle against others across the globe and compare your skills!

Customizable
Customize squirrels, dogs and other animals with fun cosmetic hats, costumes and skins – and then flaunt your fashion sense on the battlefield.

Progression
Unlock new characters and weapons – and experiment with wild power-ups and level hazards to gain an edge over your opponents.

With simple and intuitive controls, new players can easily jump in and have fun! Easy to play, but hard to master. Want to win? You better know when to attack (or defend!), jump, shoot, pass – or choose the right power-up.

Capture the Nut
Collect nuts one by one before time’s up! You have only 5 minutes to collect 5 nuts. Once time is up, the team with the most nuts wins the match. If the score is tied, then the game goes into overtime.

Thieves
Steal nuts from the other team’s safehouse and fight for 5 nuts at a time! Those who enjoy hectic battles will love this mode.

Battle
Break the nuts of the opponent team and be the last one standing.