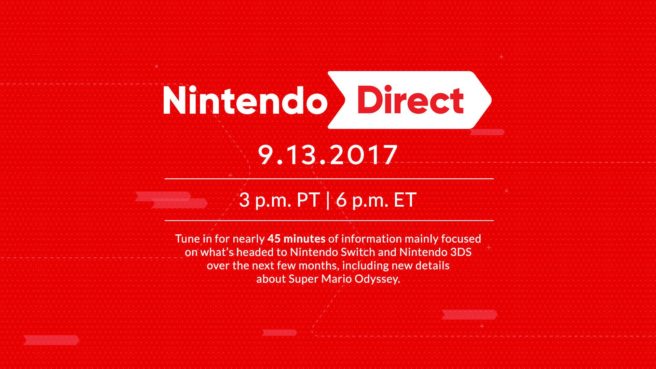 Nintendo has issued a press release recapping all of today’s news from the Nintendo Direct. We’ve posted it below.

Some of the highlights include details about key third-party games coming to the Nintendo Switch system like DOOM, Wolfenstein II: The New Colossus, L.A. Noire and Resident Evil Revelations, as well as the announcements of arcade classics coming to Nintendo Switch and a new Mario Party game for the Nintendo 3DS family of systems featuring 100 of the series’ top mini-games. The jam-packed video presentation also provided additional details for upcoming games like Project Octopath Traveler (working title) from Square Enix, Super Mario Odysseyand Xenoblade Chronicles 2.

“Momentum for Nintendo Switch is in full swing, and Nintendo 3DS continues its stellar run with a series of triple-A releases,” said Doug Bowser, Nintendo of America’s Senior Vice President of Sales and Marketing. “Between all the first-party, third-party and indie games coming to both systems, this is one of the most diverse lineups we’ve had in years. It’s a great time to be a Nintendo fan.”

To view the Nintendo Direct video in its entirety, visit http://www.nintendo.com/nintendo-direct. Additional highlights for the games and systems revealed in the video include:

**Additional accessories are required for multiplayer mode and are sold separately.

***Additional games and systems are required for multiplayer mode and are sold separately.

****Visit Pokemon.com for full details on how to receive the in-game special gift.