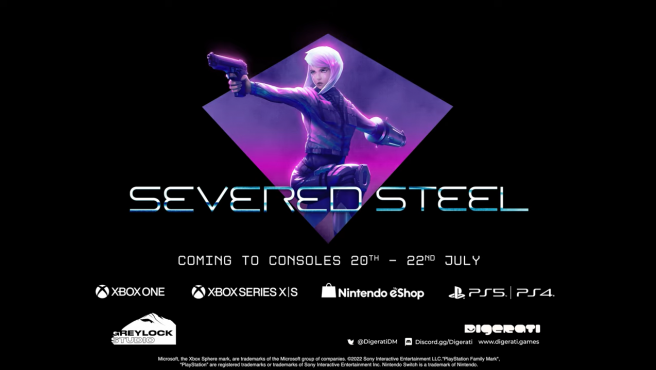 Announced last year at Gamescom, publisher Digerati have announced today that FPS Severed Steel will arrive on Switch next month, July 21. The Switch version will include all core game content currently featured in the PC version: Campaign, Firefight, and New Game + modes, 42 levels, 27 weapons, 5 arm cannons, and 22 game modifying mutators. It will not include the level editor, however. The game will be available physically as well as digitally via the eShop.

Here’s an overview of the game, courtesy of Digerati:

Severed Steel is a single-player FPS featuring a fluid stunt system, destructible voxel environments, loads of bullet time, and a unique one-armed protagonist. It’s you, your trigger finger, and a steel-toed boot against a superstructure full of bad guys. Chain together wall runs, dives, flips, and slides to take every last enemy down.

– A unique fighter: Play as Steel, a nimble, one-armed sharpshooter on a mission. There is no reloading – pick your shots well and be ready to pry a loaded weapon from your enemies’ cold dead hands
– Stylish combat: Dodge bullets, leap off walls, slide kick, throw weapons – do whatever it takes to come out on top in intense and frenzied firefights
Fully destructible environment: Pepper through plaster with sharp 4.7 mm rounds, punch through thick concrete with .50 cal slugs, or make big holes in things with your arm cannon
– Dynamic AI: No two battles are the same thanks to dynamic, unscripted, squad-based AI
– Firefight Mode: Chase high scores and fast times for leaderboard acclaim in this arcade-styled mode. Features 42 levels, each with their own sub-challenges, and over 20 unlockable, game modifying ‘Mutators’
– Campaign Mode: Blast through six compact story chapters as you battle against the forces of nefarious mega-corporation, EdenSys
– Accessibility: A range of adjustable settings for features such as difficulty, visuals, audio, controls, navigation, and more

Severed Steel will release on Switch next month, on July 21.