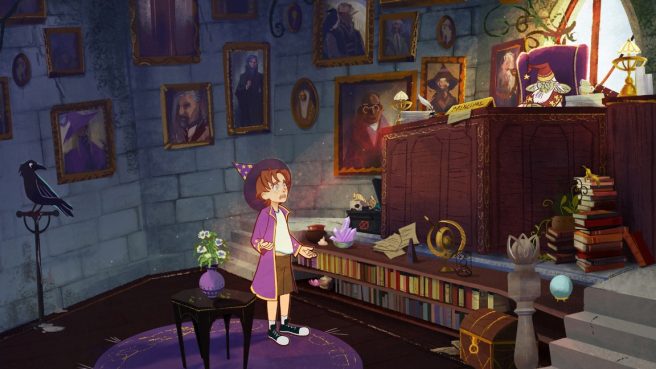 Publisher Smallthing Studios and developer Leonardo Interactive have announced Simon the Sorcerer: Origins, a new point-and-click adventure game. The project doesn’t have a release date, but we do know that it’s planned for Switch.

Simon the Sorcerer actually started out in 1993 and went on to receive a number of different sequels. This new title acts as a prequel.

Simon The Sorcerer Origins is the official prequel of the legendary Simon’s saga.

The game starts a few weeks before the events of the first episode, which left the players of the time with many unanswered questions about the reasons why Simon ended up in that mysterious magical world.

Origins tell a story about what happened before the events of the first chapter.

Simon’s rebellious life will be shattered by the unexpected arrival in the wizarding world where he will unleash an absurd and ancient prophecy that will trigger a lot of trouble! During his adventure, the rebellious Simon will do something great, obtaining moral redemption and proving that he is not just a disappointment to his parents.

He will meet his guide and mentor: Calypso. Thanks to this encounter, Simon will be able to gain a new friend who will represent a symbolic grandfather for him.

The narrative and gameplay paths unfold in countless ways without forgetting about the core elements of the saga: comedy and sarcasm. A strong bond with these features has been maintained in the dialogues, situations, and animations. Simon will often break the fourth wall by speaking directly to the players. “Hey, I am talking to you, the future player I can magically sense who is reading the Steam Page about my game!”

– Legacy – A tale that travels through time from a legendary past towards a great future.
– This is not a remake, guys! – Simon the Sorcerer Origins is a brand new game with its roots deeply bonded with the contemporary gaming world.
– Stunning 2D Art -Simon the Sorcerer Origins’ visuals and animations, refined in every detail, let the player live his adventure in a continuous flow that goes from gameplay to cutscenes and vice-versa.
– Puzzle and Comedy – The player will encounter a wide range of different kinds of puzzles. You could either challenge your wits with the classical “take and use” ones, seasoned with unexpected comedy interludes, or you can be called to solve magical arquebuses that will require the help of a little bit of sorcery. Hunt for clues, objects to combine, and all the weird stuff in the middle to reach the skill of a decent mage.
– Original License – This is a canonical chapter of Simon’s saga.
– Easter Eggs – Look for them because they could be anywhere.

The first trailer for Simon the Sorcerer: Origins below.

Simon the Sorcerer: Origins should debut on Switch as a digital download. We’ll have more coverage on the game in the future.