Skelittle: A Giant Party!! out on Switch next week 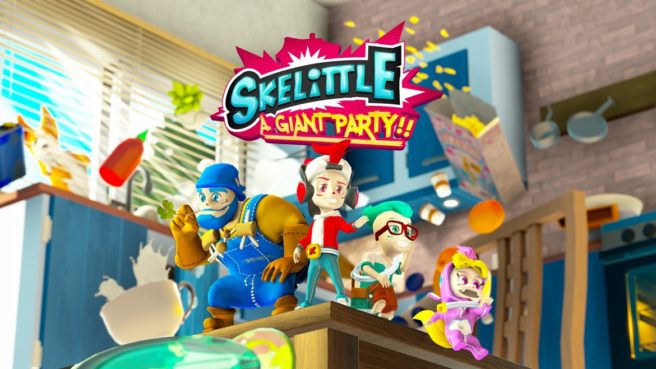 Bubble Studios announced today that its party game Bubble Studios is arriving soon on Switch. It will launch digitally on November 29, the developer confirmed.

Here’s an overview of Skelittle: A Giant Party!!, along with a trailer:

Entertaining and colourful, this party game is designed to share moments of fun with your friends and family. Challenge each other in a series of 15 crazy mini-games, collect items and have fun together building your own original games with the editor mode!

The Skelittles are tiny toys who escaped from their cereal boxes. Play with them and turn your everyday environment into a gigantic playground! Run from the terrifying vacuum robot, steal the family dog’s yummy kibble or throw your friends into the deep end of your bathtub!

Each minigame is different and features its own playful challenges. Swiftness, timing and concentration are the keys to victory!

Collect unusual accessories for each game. Combine them in sandbox mode and customize your game room for everyone’s enjoyment!

Build your unique and crazy games in the Skelittles’ lair! How about a soccer game where every player has a jetpack? A basketball-on-ice tournament? Or a crazy paintball session with gravity boots on? Anything is possible in the Skelittle’s world!

Key Features
15 colorful and funny minigames with different gameplay and graphic environments.
Sandbox mode with 50+ items to unlock to craft your very own game!
Single and multiplayer modes (1-4 players): play alone against the computer or invite your friends & family to join you for a crazy couch gaming session.
Easy to use: the game is designed to be easy to play, even for children!
Beautiful and colourful cartoon graphics that let you see your everyday environment in a new light!

Skelittle: A Giant Party!! will cost $9.99 / €9.99 on the Switch eShop. English, French, Spanish, and German language options are supported.