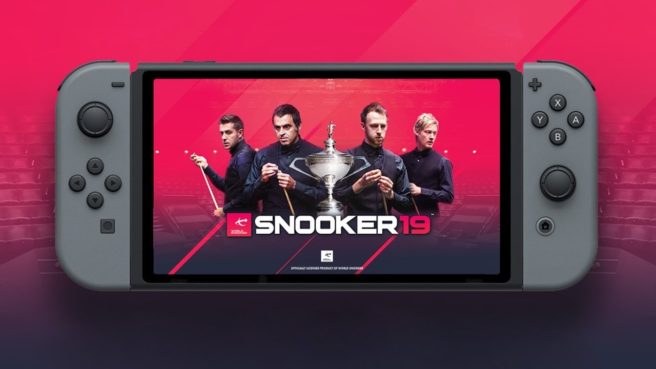 Publisher Ripstone Games and developer Lab42 today announced that Snooker 19 will launch for Switch on August 23. It will be sold digitally through the eShop.

Here’s an overview of Snooker 19, along with a trailer:

Developed by Leamington Spa based Lab42, Snooker 19 features 128 of the world’s top players including Ronnie O’Sullivan, Judd Trump, Mark Selby and Ding Junhui as they take to the table at iconic venues including The Crucible and Alexandra Palace in countries across the world including China, and Germany. As the most in-depth simulation of snooker ever, players compete in every major tournament culminating with the World Championship in Sheffield, either in the robust single-player mode, local or online multiplayer options.

Snooker 19 features a full TV-style presentation, alongside evocative visual details of the players, arenas and equipment. Player likenesses have been meticulously created using 3D facial scanning technology while the subtle yet detailed wood grain of the cues and tables is rendered impeccably. With the glare of the spotlights reflecting accurately off the polished balls, Snooker 19 sets a new visual standard for the snooker video game. Players can soak up its atmosphere while the advanced physics and AI engines ensure the action remains tense, thrilling, and most importantly, true to real life.